An Interview with Paula Bohince and Sandra Beasley 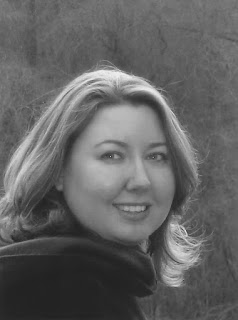 The Writer's Center is pleased to co-sponsor an event at Fall for the Book this week: Poets Paula Bohince and Brian Teare. The reading will take place on Thursday, September 24 at 3p.m. at the M & T tent outside the Johnson Center on the campus of George Mason University. Today we've got an interview with Paula Bohince (interviewed by workshop leader, board member, poet and sometime XX Files writer Sandra Beasley). Tomorrow, Director Charles Jensen interviews the other poet at the event, Brian teare. If you can get out and see these two wonderful poets, you should.

Paula Bohince is the author of a poetry collection, Incident at the Edge of Bayonet Woods, which was published in 2008 by Sarabande Books and received its inaugural Aleda Shirley Prize. Her poems have appeared in The New Yorker, Literary Imagination, The Kenyon Review, Slate, and The Yale Review. She has received the Grolier Poetry Prize, the “Discovery”/The Nation Award, the Amy Clampitt Resident Fellowship, and a 2009 Fellowship from the National Endowment for the Arts. She has taught at New York University, the New School, and elsewhere, and she was the University of Mississippi’s first Summer Poet-in-Residence. She lives in Pennsylvania.

I'm struck by the depth and complexity of your first collection,
Incident at the Edge of Bayonet Woods. What are some of your key influences--professors, beloved books--and how are they reflected in these poems?

Thank you, Sandra, for saying that. I’ve been lucky to have had a number of incredible professors, including Philip Levine, Sharon Olds, Marie Ponsot, Mark Doty, Lynn Emanuel, and Agha Shahid Ali. I think, for brevity’s sake, I’ll concentrate on Galway Kinnell, who was my MFA thesis advisor at NYU and whose presence might be most evident in the book, both by his books and his teaching.

During my last semester of graduate school, Galway and I would meet weekly in a coffee shop near school. We’d go over my poems line by line, side by side, and talk about word choice, about simplicity, about creating a musical line, about thoughtful description. I remember making a lazy description of a snake moving through grass, and he said very gently, “You know, poets have been trying for centuries to describe the way that a snake moves.” And we were both quiet for a minute. That moment felt very humbling and generous to me. He made me want to go more slowly, to be more thoughtful. In the book, I describe a snake in “The Gospel According to Paul,” and I thought about Galway when writing it. After those meetings, after school ended, I wanted to begin fresh. The only poems in the book that began in graduate school are “Trespass” and “First Day of the Hunt.”

I learned so, so much from Galway and his kindness toward me and my work, from his time and attention given to my rough poems. I thought of him often during the writing of this book and continue to do so, especially during revision when I have those WWGD questions. Wondering what he’d find necessary or obfuscating. How he would respond to a particular music. I feel such kinship, via his poems, with his vision of the natural world. I always return to his books when I’m feeling lost, when I need to be grounded in the qualities that I want my poems to have.

One of my most beloved books is Jane Mead’s extraordinary The Lord and the General Din of the World. I had first read it in my senior year of college, and it completely changed the way that I approached poetry. It seemed utterly open, vulnerable, and questioning. You know those books that resonate with you so much, on a level you might not even be able to articulate? That was, and continues to be, Jane’s book for me. It was the book that I literally carried around for years, trying to absorb its lessons, both on how to approach poems and how it might be possible to live.

There have been so many other collections that have been influential, but I will always be grateful for this particular book for its continual effect on me. And to have my book also come out with Sarabande, which has been amazing, and to have Jane’s words on my book…I never could have imagined.


Your first book has an unusually specific framing story, as reinforced by this gloss on the back cover: "...Spanning decades, and set on a decrepit, inherited farm in Pennsylvania, the daughter and father navigate the poverty of their environment and their own troubled relationship. Details of the father's murder are gradually uncovered, and we eventually learn that he was killed by a trusted laborer." At what point in the composition and accumulation of these poems did you decide that would be the thematic focus? 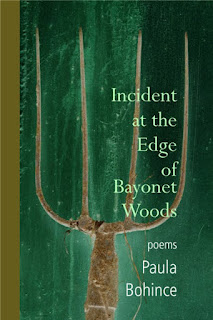 Both ordering and the use of the framing device of the mystery came very late in the writing and organizational process. I’d been writing the book from 2001-2006, and I’d viewed the manuscript as a collection of elegies: the lyric I couched in both a remembered and dreamed Pennsylvania. It wasn’t until the summer of 2006, shortly before I moved back to Pennsylvania from New York, that using the idea of an unfolding mystery formed. The poem “The Apostles” and the “gospel” poems were written during that summer; these four poems are the only ones, in my mind, that speak directly to the crime presented in the book.

After I had written “Prayer,” I felt that the poem may work as an opener, but I wasn’t writing any poems with a sense of how they’d eventually connect.

“Eating Fish in Pittsburgh” was one of the earliest poems written, as was “The Fatherless Room.” After the vast majority of the poems were written, as I began thinking about order, a particular poem would find its “partner” poem, and so pairs and clusters began to form. Thinking about a seasonal progression also helped create another kind of arc. It was difficult for me, nearing the book’s completion, to try to present a story that “made sense” for a reader. That was a real leap for me: imagining someone reading the entire collection and what questions they might have and what answers I should try to provide.

When you are reading selections from the book in a live venue, how do you adapt to an audience that doesn't have access to the "full story" of the collection?

Giving readings has been such a pleasure, and I especially enjoy looking out into the audience and connecting with people as I read from the book. I usually begin by saying something like, “This book takes place on a farm in Pennsylvania and concerns itself with the sudden death of a father.” After that, I usually ignore the narrative of the book and read poems that I think work individually and are sonically interesting and different from each other. I’ll usually read poems in the general order in which they appear. Usually any talking I’ll do between poems is to offer a kind of break for the audience. I might briefly explain how I got an idea for a poem, or maybe a tidbit of my family life, i.e. my father’s hunting in “First Day of the Hunt” or a phrase my mother would say in “Still Life with Needle.”

I was intrigued (and ultimately, impressed) by the inclusion of the acrostics in this collection--a form more often associated with wordplay, versus such a grave subject. How did you gravitate to the form?

I’d never written acrostics before, but maybe four years into writing this book, I was exhausted. I was exhausted by the emotional work of getting into the headspace necessary to access these poems. I’d begun to feel, as the poems accumulated, that I’d been building a house and then living in that house solely occupied by my father and myself. It was wrenching. I honestly feared that I would never be finished writing the book. I needed a door out for a while, and I wanted to write in a form because it felt like a way of being less alone in the writing process.

I thought, hmm, sonnets? Nope. I write terrible sonnets. So I tried one acrostic, which I believe was “Acrostic: Outhouse.” It felt like a gift, it came so easily. I tried another. And then another. All but two acrostics that I wrote during that time made it into the book. At the time, I told myself that I would write acrostics about lighthearted subjects to get away from the book. Well, that didn’t happen, naturally, but it was one more poem, and then another, and then another. I’m actually very grateful to those acrostics, which provided a kind of ease and encouragement that I needed to push through the rest of the book.

Many thanks to Sandra and The Writer’s Center for the opportunity to answer these great questions. It’s been a pleasure.
Posted by The Writer's Center at 9:00 PM