Following Abdul's post yesterday, I'd like to list my favorite books read in 2008. Unlike many year-end lists, my notables weren't necessarily published in 2008. I just read them this year. Oh, and for those of you who may be wondering why it's 17 and not 10 or 5 or whatnot. It seems like a good number. It's the number the great, the legendary, pitcher Dizzy Dean wore. Does that seem any less arbitrary now? I have no idea how my mind works.

The Given Day, Dennis Lehane. I've blogged on this before. It's the best novel I read in 2008. Enough said. If you'd like to hear more about what I think about this book, click here: Here.

Sam Patch, The Famous Jumper, Paul E. Johnson. I've long wanted to read this book, ever since it came out a few years back. I grew up in Rochester and was pretty familiar with his story: guy jumps from waterfalls, grows famous, then dies in a fall/jump at the High Falls in Rochester. What Johnson does here is provide a lot of background on Patch and the time he lived. Read my review of the book here.

Deliverance, James Dickey. Why is this book not read by more people? Yeah, maybe it's Iron John stuff for men before Robert Bly, before Chuck Pahluniak. (You read this novel, didn't you Chuck?) But the prose is beautiful, deep and somehow very earthy and slow (in a good way--the kind of thing you see rarely anymore). This is a book that builds through language and a good old-fashioned story. Kind of like Huckleberry Finn for grown-ups in the Age of Suburbia. Oh, and I wrote about it here.

I'm a big fan of Norwegian writer Christensen's elegant, dialogue-rich prose. (When will his weird, wonderful Maskeblomstfamilien be translated?) You may recall the big fat translation of The Half Brother in 2005. I read Modellen while on my annual trip to Denmark this year (and my wife's family was so kind as to gift us with three more of his books this Christmas!). Modellen is a portrait of an artist going blind and trying to find ways to cure his malady. It's a book that refuses to allow you a moral core to latch onto, and it's frighteningly scary for that reason.

Savage Peace, Ann Hagedorn. This is a book of history written by a gifted historian who happens to write prose like a musician and a poet. A thoroughly researched story of the year 1919 from many different viewpoints. Anyone interested in post-WWI life will enjoy this one. It reminds me in its scope of Don Delillo's super-brilliant Underworld. (It works well in tandem with Lehane's The Given Day, which is set in the same year. Many characters, like young J. Edgar Hoover, appear in both books.)

Last Known Position, James Mathews. This collection of stories by longtime Writer's Center member won the prestigious Katherine Anne Porter Prize this year--and for good reason. The stories range remarkably from sad and touching to comic and breathtaking, sometimes in the same story. "Grenade" stands in the tradition of great coming of age stories (think TC Boyle's "Greasy Lake") with a modern military twist. "Last Known Position: 2,000 Feet Above the World and Descending" manages to be funny and tragic (and in fact shocking) at the same time. "The 5th Week" might be one of the best short stories I've read in a long, long time. And "Man Swallows Goldfish While Sleepwalking, Chokes to Death" is delightful. All in all, a great and worthy collection. I can see why Mathews won the Porter. Those of you who've toiled on your stories for a long time, take heed! (By the way, James Mathews will read at The Center together with Alex MacLennan on January 25th at 2 P.M.).

Charming Billy, Alice McDermott. This is a book that won the National Book Award in 1998 and I'd begun reading it with my writing group three years ago. We read only the first chapter (it was for an exercise we did on starting novels). I'd wanted to finish but never got around to it until 08. It's a slow-moving novel but rich in detail. The prose is leak-proof. Irish American lit. Is there such a thing? It's a novel about love and surviving (or not surviving) its loss. A touching book without being melodramatic. 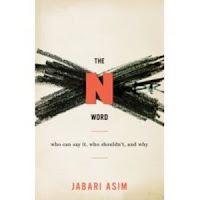 The N Word, Who Can Say It, Who Shouldn't, and Why, Jabari Asim. This is one of two books I "read" while driving home to western New York. So, yeah, I actually heard it read to me. Still, this was a fascinating book, and in fact one chapter on 19th century "race" literature made me want to go back and find some of these rare books. The title says a lot about what you need to know going in, but you'll learn a lot about race in the U.S. by reading this book.

Muhammed, by Karen Armstrong. This is the second book I read while driving this year. A former nun turned academic, Armstrong has written extensively on religious matters, on diverse subjects. She's a cool, steady hand when it comes to religion. Which is to say: objective, fair, balanced. I think every American should read a book on Muhammed, and this isn't a bad start at all.

In the Lake of the Woods, by Tim O'Brien. Perhaps most interesting use of storytelling comes from this book. I'd just read, finally, The Things They Carried and loved it so much that I had to go and read this one, which had been left untouched on my shelf for years. No more! Given that the story involves the disappearance of the wife of a politician (who'd just lost an election thanks to a scandal, one in which a Vietnam atrocity plays a part), it seemed an appropriate book to read in this election year.

Lost Highway, Richard Currey. This fascinating story by a Writer's Center instructor is about a country musician's struggle to the top he never truly reaches. Those of you who've seen the disappointing Walk Hard: The Dewey Cox Story may recognize some elements here. Not that the film is based on the book; it's not. I just wish it had been.

By the way, if anyone wants this book I have a CD version of it. If you'd like the audiobook, contact me at this blog and I'll send it to you FREE.

Hans Christian Andersen: The Life of a Storyteller, Jackie Wullschlager. I'm a fan of Andersen's work and also a fan of his life--that is, I'm interested in him. This book provides rich source material on that life.

The Pitch that Killed, Mike Sowell. A fine, fine baseball book subtitled Carl Mays, Ray Chapman, and the pennant race of 1920. About the only baseball player ever killed by a pitched ball. Was it an accident? Find out by reading the book. (Sowell apparently has an itch to write these kinds of books--no harm there! He earlier wrote this awesome-sounding book.

Confessions of an Economic Hit-man, John Perkins. The third book I "heard" this year. I didn't realize I'd driven so much this year until now.) This is about, among other things, exploitation of the so-called Third World by the so-called West. For all the confessing Perkins does in this book, what's truly interesting, to me, is what he doesn't seem to want to admit. Still, it's a courageous, interesting book that affords lay people like me a unique perspective on things.

I Got Somebody in Staunton, William Henry Lewis. I saw Lewis read a week before joining The Writer's Center staff. It was a great reading, so I bought the book. What can I say? This guy's got jazzy, musical prose that hums on the page. His characters and stories are not easy to pin down but for that reason I truly admire them.

The Dangerous Joy of Dr. Sex, Pagan Kennedy. This collection of essays on the quirkier side of life was written by Pagan Kennedy, who during her high school days in Bethesda attended workshops at The Writer's Center. She has since moved on to writing more than ten books (including the Orange Prize finalist Spinsters). The publisher of this book is another local product, Andrew Gifford. You can read about him here.

Chronicles, Bob Dylan. I deeply admire Bob Dylan. And now I finally got around to reading the volume one of his memoir, which I'd bought when it first came out a few years back. You can see Dylan's unique voice in this odd, disjointed, wonderful little book. When will volume two be release? Inquiring minds want to know!

So there it is, my little list of notable books 2008. Some clear pattens have emerged, it seems, in my reading. But I'm too tired to think about that right now. Hope you've had good reads in 2008 and many more in 2009.

If there are some you'd like to call out, do let me know.
Posted by The Writer's Center at 5:00 AM