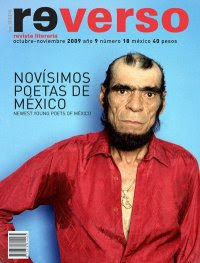 
What is Reverso Magazine?

Our primary objective is the promotion and diffusion of literature, especially from young writers. We strive to promote contemporary creative expression by giving space to new writers, fine artists, and graphic designers. In collaboration with them, we seek to occupy an important place in the country’s cultural landscape.

As such, we hope to establish a cultural program that will enhance the intellectual relationship between USA and México through artistic expression, via literature and photography, (concluding in a dossier dedicated to pictures). We also wish to publicize these efforts and to sponsor related events in different forums.

We have published literature from regions and countries such as Spain, Slovenia, Catalonia, France, Germany, Galicia and Norway; coproduced with organisms such as the Embassy of France, the Goethe Institut, the Xunta de Galicia and The Royal Norwegian Embassy in Mexico.

Where can people get a copy of the magazine?

Reverso is sold throughout Mexico in bookstores, museums, cultural centers and more than 50 sale points. It is published quarterly since its foundation on the year 2000; it publishes short stories and poetry, and it is illustrated by the plastic or graphic works of regional artists. The print run is 3,000 issues.

Reverso is a literary magazine that has received on three occasions (in 2004, 2005 and 2007) the Edmundo Valadés prize from the Support for the Publication of Independent Magazines, funded by the National Council for Arts and Culture (CONACULTA) through the National Fund for Culture and Arts (FONCA) and the National Institute of Fine Arts (INBA). Reverso circulates in bookstores, cafes, art galleries, universities and magazine stands in Guadalajara; throughout Mexico it is distributed by the bookstore chain Educal, Libros y Arte; en universities, cultural centers and diplomatic offices in Barcelona, Galicia, Paris, Frankfurt, Caracas, Buenos Aires and Santiago.

Who are your readers?

Our average reader is a young university student or professional, ranging from 18 to 35 years old, as likely to be a man as a woman. Throughout the major Mexican cities readers include artists, teachers, housewives and managers between 25 and 45 years old.

Reverso is 56 pages long, with a photographic dossier added in, with a clean design that respects the value of art direction in presenting the work. The magazine publishes short stories and poems, illustrated by fine and graphic art by local artists. There is a section of reviews of independent books and editorials promoting literature that meets rigorous aesthetic standards. The production run totals 3,000 copies, the final size is 21 x 27 cm.
Posted by The Writer's Center at 9:00 PM