Personal Reflections: How The Writer's Center Helped Me Get Published 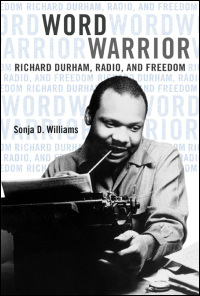 I want to testify.
I’m living proof that if you are beginning, refining, or marketing your writing project, The Writer’s Center (TWC) can help you accomplish your goals. About six years ago, I took my first TWC workshop. After enrolling in several subsequent classes, I was able to get a contract to publish my biography, Word Warrior: Richard Durham, Radio, and Freedom, which will come out early September 2015.

Richard Durham’s pioneering accomplishments as a broadcast dramatist, journalist, and activist (1917–1984) grabbed my attention long before I knew TWC existed. As an experienced public radio producer, I had written and produced a radio feature about Durham and his award-winning radio dramas of the 1940s. Later, I wrote brief articles about Durham’s radio scriptwriting career, which began during the Great Depression and extended to the early 1950s in his Chicago, Illinois hometown.

But Durham’s versatile and politically outspoken writing style, along with his eventful life, was so fascinating that I decided to write a book-length account.

However, this type of writing was way out of my comfort zone. So I searched for places where I could learn from and be inspired by others with similar writing aspirations. As a result, The Writer’s Center came into focus. My first workshop was with award-winning writer C. M. Mayo. She helped participants develop or fine-tune their literary voice.

I was hooked. What other gems did the Center offer, I wondered?

Soon enough, I enrolled in workshops that helped me tackle grammatical pitfalls, storytelling dilemmas, and social media platforms. I even took several–yes, several–workshops about writing effective book proposals. And I gained insights from them all.

Thankfully, my finished my book proposal was favorably received by two well-regarded academic presses. I eventually signed a contract with the University of Illinois Press and the real heavy lifting started. I slowly wrote chapter after chapter; one word, one sentence, and one painstaking paragraph at a time.

Once again, I turned to The Writer’s Center.

Two of the Center’s non-fiction workshops—led by established biographers David O. Stewart and Ken Ackerman—were extremely valuable. With Stewart’s and Ackerman’s insightful critiques, along with thoughtful comments from fellow workshop participants, I left each of those weekly sessions with renewed dedication and knowledge.

Currently, I remain connected to veterans of those nonfiction workshops. Each month eight writers, six of whom are TWC alums, meet to continue critiquing and supporting each other.  Several articles and two books—Cheryl LaRoche’s Free Black Communities and the Underground Railroad: The Geography of Resistance (The University of Illinois Press, 2014) and my Word Warrior—have come out of our group. More publishing success stories are on their way; a testament to the skills we honed as The Writer's Center's workshop attendees.

So, wherever you are in your writing process, I hope that you’ll take the time to engage in and succeed as a result of The Writer’s Center experience. And I look forward to reading your testimony.

Posted by The Writer's Center at 3:02 PM