We'd like to announce a couple of events around town later this month:

February 28 at 7:30 p.m. there will be a new play reading of “Waiting” by workshop leader Richard Washer at Theatre on the Run, 3700 South Four Mile Run Drive, Arlington, VA 22206. The play, directed by Leslie A. Kobylinski, is a comedy in which a divorced baby boomer, her daughter and an unsuspecting waiter navigate our changing perceptions of senior citizenry. For more information visit http://www.firstdraft.org/.

Over the last 150 years, Washington, DC’s Chinatown has been home to many immigrant groups. Each has contributed to the vibrancy and diversity of our neighborhood and our city. Three cultures are highlighted in this annual celebration of poetry and voice.
The 2012 poems focus on music.  Many of the poets will take part in the reading in person or via telephone.

RVSP to rsvp@washington.goethe.org
Additional readings will take place throughout the city during Spring and Summer 2012. The poems and translations, along with the full schedule of readings, can be found at www.goethe.de/timeshadows.
In cooperation with the Chinatown Community Cultural Center, the Confucius Institute at George Mason University, and the Martin Luther King Jr. Memorial Public Library.
Posted by The Writer's Center at 11:55 AM No comments:

Marsha Coleman-Adebayo at The Writer's Center

A few months ago, while contacting authors scheduled to read at The Writer’s Center, I learned that the publication date had been pushed back for Charlene Smith’s forthcoming book, Mandela and America, We were soon able to reschedule her reading, originally scheduled for February 19, to July 15,. (That’s three days before Mandela’s 94th birthday.) The change in plans led to some very good news when Charlene recommended that we contact Marsha Coleman-Adebayo to speak in her place at 2:00 p.m. on February 19.

We’re very excited about the upcoming program. Dr. Marsha Coleman-Adebayo, author of No Fear: A Whistleblower’s Triumph over Corruption and Retaliation at the EPA (Chicago Review Press), is also the founder of the No Fear Coalition, a group of civil rights and whistleblower organizations working to increase legislative protections for federal employees.

No Fear describes Dr. Coleman-Adebayo’s experiences at EPA and her work with vanadium mine workers in South Africa when she served as the liaison to the White House on the Gore-Mbeki Commission. The Commission was established during the Clinton administration after the fall of apartheid. Coleman-Adebayo discovered that African miners were being exposed to lethal vanadium dust, but her efforts to investigate the crisis were stifled and she became a target of personal abuse.

The resulting conflict carries echoes of earlier struggles. Writing in Time Magazine, Jack White commented: “Inside Marsha Coleman-Adebayo there's a streak of Rosa Parks.” The toxic mix of deadly pollutants and official indifference also calls to mind the story of Erin Brockovich. Parallels to that story may be furthered by a film Danny Glover is working to produce.

It was a long fight, but in 2000 Dr. Coleman-Adebayo won an historic lawsuit against the EPA on the basis of race, sex, color discrimination, and a hostile work environment. She testified before Congress twice, leading to passage of the No Fear Act to protect whistleblowers, The Act, passed unanimously by the U.S. Senate, was signed into law by President George W. Bush. It was the first civil rights law in the U.S. in this century.

Coleman-Adebayo’s work has been widely recognized. The National Whistleblower Center has described her as one of the most influential “truth-tellers” in the country. The Project on Government Oversight inducted her into the Hall of Fame in 2007. The Southern Christian Leadership Conference recognized Dr. Coleman-Adebayo’s leadership in the civil rights movement at its 50th anniversary gala in Atlanta, Georgia and she has received an award for Outstanding Commitment to Global Health and Development from Harvard University. Several interviews are available online, including one with Tavis Smiley and one on Radio Ecoshock, which will air February 14 on WPFW, 89.3 FM.

The program is free and open to the public. It begins at 2:00 p.m. Sunday, February 19, here at The Writer’s Center, 4508 Walsh Street, Bethesda, Maryland. Dr. Coleman-Adebayo’s talk, which will include a brief video presentation, will be followed by a question and answer session, a reception and book signing.
Posted by The Writer's Center at 2:27 PM No comments:

Pushcart Nominee Jim Daniels on his poem "The Heavy Stuff"

The poem “The Heavy Stuff” came out of the experience of my parents moving out of my childhood home, the only home I remembered, in Warren, Michigan, near the edge of Detroit. I wanted to both save the memories of that place and not fall into sentimentality about remembering—that was my struggle with this poem.
Part of my writing process is to let everything in at first—the spark for the poem was my parents’ moving, but that reminded me of moving my grandfather out of his house in Detroit, under very different, dangerous circumstances. A man who, instead of moving away when his neighborhood had become unsafe, crumbling around him, lined his living room with broken televisions
I’ve always been very interested in the writing of Bruce Chatwin (In Patagonia, Songlines, etc.) who often wrote about the human tension between being nomadic and establishing roots, and I’ve written a lot about that in other poems and short stories. The fiction writer Richard Price once said that where you're from is "…the ZIP code for your heart." So what does it mean to leave that physical zip code, and how do we carry it around with us in our hearts? sets so the thieves wouldn’t know which one to steal as a survival tactic.
I’m interested the physical move versus the emotional move—and what the “heavy” stuff is on both levels. How it jars us, shakes us up. Even when it was such a nondescript place like Warren, a community of neighborhoods built for autoworkers, literally surrounding the auto plants—no place to congregate except on street corners.
Growing up there, we were like the small birds that hawks could easily swoop down on. And who were the hawks? We never saw the hawks—those who controlled who worked when, who got laid off, who worked overtime, who lost their jobs permanently, forever. In another [one] of my poem[s], a father explains to his son, “we are the sparrows,” so this is a thread I’ve been exploring over the years.
One aspect of “The Heavy Stuff” that is totally made up is the hawk, and to be honest, I’ve never seen a hawk anywhere near Detroit. But in Pittsburgh, where I live, a hawk did fly into my picture window attempting to nab a bird at our nearby feeder. I see hawks frequently because I walk through Schenley Park, the Central Park of Pittsburgh, on my way to work every day, and the hawks often glide over a ravine in the park that I walk over on a bridge, so that they are often very close, gliding over my head, making my hair stand on end as I cross over.
“The Heavy Stuff” is my fifth publication in Poet Lore. The first time was 1993—nineteen years ago—so I feel like Poet Lore is one of my literary homes, a place I am comfortable submitting to (and being rejected by) because I know I will get a good, careful read. One of the things I noticed about the poems I’ve published in Poet Lore is that they are all very different. Just the titles of some of them—“War Dancing,” “I Slept with the Singing Nun,” “Salsa,” “Falling Short of Miraculous,“ “Christmas Dinner, Detroit, 2008,” and “¿”—suggest the range, I think. I have also read at The Writer’s Center on three different occasions over the years. I enjoy the sense of community there, and the energy that a community writing center can create.
In terms of form, I chose couplets for this poem because I wanted to be able to jump around in time and memory. It seemed to me that it needed white space to allow the reader to move around the different landscapes.
The hole-in-the-wall story is classic Daniels family lore. My mother used to sometimes tease me by trying to get me to kiss her when I was going out at night when I was a teenager. Back then, I did not want to have much to do with my parents. She jumped off a chair as I came out of the bathroom and startled me so much by butt crashed back right through the plaster. After my father repaired the hole, you could still
see the faint outline of where I’d fallen, and I’d bet good money you can still see it now in that house we can no longer enter—I’d put my mark on that house in a very human moment, so I felt I had to include that in the poem.
All of us, and our houses, are going to be rubble someday. Going over the old Poet Lore poems, I realized that the hawk in the park that I mentioned showed up in “¿”—a poem about a friend’s suicide. The hawk is out there somewhere, and I guess I’m all too well aware of it. “The Heavy Stuff” can keep us rooted to the earth, or make the impact of our fall all the more devastating.
Jim Daniels is the author of "The Heavy Stuff," (p.43) published in Poet Lore (Volume 106, Number 1/2). You can purchase the issue here, or procure a subscription to Poet Lore here. 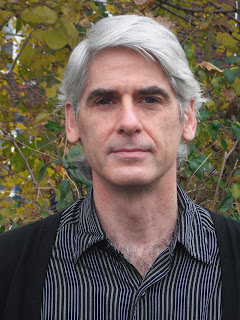 Jim Daniels’ recent books include Having a Little Talk with Capital P Poetry, Carnegie Mellon University Press, All of the Above, Adastra Press, and Trigger Man, short fiction, Michigan State University Press. Birth Marks, BOA Editions, will appear in 2013.
Posted by colleen at 12:30 PM No comments:

The deadline for submission is February 21. The winning poem will be published in the Little Patuxent Review, dramatically enlarged and illustrated for display during National Poetry Month in a Central Library show window, and featured in a reading at the CityLit Festival.

And, mark your calendars for a special Little Patuxent Review event on Sunday, March 3, at 7:30 P.M. at The Writer's Center. We’ll feature a reading and discussion with poet Truth Thomas and Little Patuxent Review editor Laura Shovan. Thomas is guest editor for the winter 2012 Social Justice issue. He and Shovan will lead a discussion on the various ways literature can facilitate understanding and change. The program will include poetry, fiction, and creative nonfiction readings by authors published in the journal.