We're glad to post a blog by David Taylor, who leads a half-day workshop on "Writing the Documentary Treatment" on March 2, and "Narrative Science Writing," a four-week workshop that begins March 13.

You’ve got an idea for a documentary. It’s true, an important story with relevance to viewers today. Fantastic. How do you tell it?

‘Writing the Documentary Treatment’ gets that process started. One question we’ll explore is, Who does the story happen to?

Like fiction, documentary films use the narrative elements that draw us into any story: intriguing characters, compelling scenes and conflict. (Conflict doesn’t mean people shouting. It can mean a disconnect between a person’s desires and her situation.) Some time ago I worked with Smithsonian Channel and Spark Media on a film about the original indie label, Folkways Records, which later became Smithsonian Folkways. In the 1940s, Folkways started on a shoestring. In a cramped Manhattan studio, they recorded musicians now recognized as legends: Woody Guthrie, Leadbelly, Pete Seeger and many more.

How do we tell that story in 47 minutes? In the first few minutes the film had to quickly establish why the story mattered – the iconoclastic label, the long string of recordings of all kinds, and the music that anyone would recognize.

Then, just as important: we had to show how its success was always precarious, and that Folkways was likely to collapse before any of that came to pass. We decided to show the moment where the founder, Moses Asch, faced disaster.

Asch, a sound engineer, envisioned starting his own record label but stumbled early. After bankruptcy in 1946, Asch was banned from having any significant role in the recording industry. At age 42, he considered his life a failure.

Why give precious screen time to such a low point, so far from Folkways’ ultimate success? Because in that moment we feel the crisis that Asch faced, and we feel the weight of what’s at stake: Recording wasn’t a platinum album or a paycheck for Asch. At some level it wasn’t even a choice. It was something he had to do. He would go rogue.

That reveals the essence of a leading character, and it does it through the action of his behavior.

The film, Worlds of Sound: The Ballad of Folkways, unfurls the legacy of the musicians and producers drawn into the Folkways orbit. Ultimately the story is bigger than Asch. But for grabbing viewers quickly, there’s nothing like a character in crisis.

Posted by The Writer's Center at 11:09 AM No comments:

As some of you know, Richard Blanco will return to the Washington area this spring, and we’ll host his poetry reading with Dan Vera here at The Writer’s Center on Saturday, May 18. Richard’s publisher had contacted us  to say that he was hoping to read from his new collection of poems at the Center, where he had been a very popular workshop leader before moving several years ago. Richard burst onto the national spotlight earlier this year when he was selected to read a poem at President Obama’s inauguration.

His return visit got me thinking about former workshop leaders who have left the area but remain active in their literary community.  Today we’re glad to post news from Reuben Jackson, a native Washingtonian who now teaches high school in Burlington, Vermont. Reuben’s long-running poetry workshop, A World Bold as Love, was titled for a Jimi Hendrix song. He worked for several years as an archivist in the Smithsonian Institute’s Duke Ellington collection, and he now hosts a music program on Vermont Public Radio.


As a long-time workshop leader in DC, can you talk a bit about your experience now teaching high school students in Burlington, Vermont?

(RJ): If I had to sum up my experiences as a high school English teacher in Burlington, Vermont, I would borrow two words from an essay by Amiri Baraka: The Changing Same. (Ok, that's three words.) What I mean is that I constantly run into (and/or teach) younger versions of the friends I had in high school--not to mention students interested in worlds and ideas beyond the "norm." In other words, students I consider younger relatives--literary and musical soulmates.

Of course, these students are, as said students like to say, way more tech savvy than I would have been at their age--or am now, for that matter.

Teaching is draining as all get out, but I like it a great deal. It is a joy and a challenge getting students to introduce themselves to their way of thinking--especially in this test-heavy academic environment. Still, I am glad I changed lanes.

You’re known both for your poetry and your love of music, and you’ve often brought the two together in your poetry workshops. Can you talk a bit about how you see these forms feeding each other, and also about your music program on Vermont Public Radio.

(RJ): As far as poetry /music connections are concerned, well, I consider both genres gateways to possibility. Both provide numerous routes to their respective destinations. (I am thinking of form here.) As a teacher, I constantly find the use of form in poetry introduces writers to aspects of their craft they may be less familiar with. Believe it or not, high school students are often more willing to write, say, a sonnet in praise of the young man/young woman whose presence sets their hearts aflutter than older, more guarded bards.

Could you talk a bit about some of the poets and composers who have influenced you.

Could you describe the cultural and literary community in Burlington, and any differences or similarities to what you’ve seen in the Washington area.

(RJ): The extent of my interaction with Burlington's literary community mainly consists of the workshops I've done with the Young Writers Project. I consider myself someone who has been blessed with a number of writing opportunities, but who doesn't really write poetry these days . My weekly jazz show on Vermont Public Radio is a kind of creative endeavor--as is the structuring of substantive ( and hopefully interesting) units of study for school.

By the way, Burlington is more like DC than you might think. I didn't expect a Norman Rockwell painting come to life--but it is interesting how we humans end up recreating that which we thought we had enough of..(Tailgating--strip malls, etc.)

Many of your friends in the Washington area keep in touch by way of your many poetry and music postings on Facebook. Would you like to talk about the role social media might play in the creative process and/or in strengthening a sense of community across great distances?

(RJ): Social media--Frankly, Facebook is my daily drum. It's another outlet for all the flotsam and jetsam that flows through my weird brain--and a way of keeping in contact with the various stations of one's life. Still. I try not to spend too much time on it. It is dangerous that way.

Are there plans for a return to the Washington area?

(RJ): Will I ever return to DC? I am not trying to be flippant (or pseudo sagacious ) here, but if this life has taught me anything, it's what the great pianist/composer Thomas "Fats" Waller once said--"One Never Knows, Do One?" I should also add that my last trip to DC reminded me that my hometown had indeed gotten too fast for me. I was glad to see so many old friends, but goodness, I missed the mountains--and people saying hello on the street.

Posted by The Writer's Center at 12:27 PM No comments:

Playwriting with Paula Vogel and the Veterans Writing Project 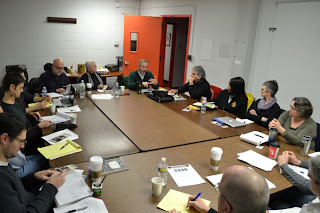 As part of The Writer's Center’s growing partnership with the Veterans Writing Project, we jointly hosted a two-day playwriting seminar led by Pulitzer Prize-winning playwright Paula Vogel on February 2-3.

Vogel, who has recently retired from academic teaching after directing MFA programs at Brown and Yale, included playwright and director K.J. Sanchez (Re-Entry), dramaturg Walter Bilderback and director Blanka Ziska (both from the Wilma Theater in Philadelphia) in the workshop.

Participants were veterans, active service members, and military family members including several veterans of the wars in Iraq and Afghanistan.

Beginning with ideas drawn from Aristotle’s Poetics, Vogel broke down the elements of theater including plot, character, music, and spectacle. She then spent two full days expounding on these elements and having participants create scenes and short plays as exercises in developing a clearer understanding of how the elements functioned individually and in relation to the others.

The participants also completed exercises that Vogel set up for them. “Imagine Little Red Riding Hood goes to boot camp,” she said. “Now write a play about it.” There were other exercises involving character—write scenes about Saddam Hussein’s childhood or craft a scene that teaches something the FBI doesn’t know about one of the Ten Most Wanted.

One participant said he learned more in one weekend with Vogel than he had in all of his previous writing training combined. Clearly, not your typical workshop, but typical of what the VWP and TWC hope to provide as their partnership strengthens. Vogel has promised to return to The Writer’s Center and continue her work with the Veterans Writing Project. We can’t wait.


Ron Capps is founder and director of the Veterans Writing Project.  The Writer's Center has been funded by the National Endowment for the Arts to offer programmatic support to weekly writing workshops he and Dario DiBattista lead at The National Intrepid Center of Excellence on the campus of Walter Reed National Military Medical Center.


Posted by The Writer's Center at 2:21 PM No comments: