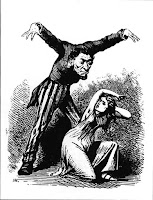 Happy Thanksgiving everyone! Those of you who're planning on avoiding watching football and heading off to see a movie after your big dinner may want to check out the vampire flick Twilight.


Last week I joined the throngs of teenagers and read the wildly popular, young adult novel—Twilight, which was just released as a motion picture. As I wandered into Bella’s story of love to a vampire, I kept getting interrupted by a nagging feeling, like an itch that won’t go away—this book reminds of something else. Then it hit me. Twilight is like a Bronte novel, especially Emily Bronte’s Wuthering Heights.

Take Edward, the love interest of Twilight. In many ways he’s another Heathcliff—the perfect hero and anti-hero. Edward keeps saving Bella in the novel (ah, the hero), yet his inherent desire is to suck her blood (the anti-hero). Both Edward and Heathcliff epitomize the Byronic hero—they’re moody, mysterious, magnetic men with a streak of danger to them. It’s interesting that Robert Pattinson, who plays Edward in the movie, is British. And what is also telling is at the end of Wuthering Heights, Nelly wonders if Heathcliff is a ghoul or vampire.

The setting for Twilight is very Bronte-like, very Gothic. The dark, constantly wet, verdant Olympic Peninsula of Washington state evokes an image similar to the moors of England. Both are precarious places where you can easily lose your way.

Twilight in general has a very anti-modern, antiquated feel to it. Even though the novel is supposed to be set in current time, little modern technology exists in it. In reality, technology is a lifeline for most middle-class American teenagers: their lives are full of text messaging, IMs, Facebook, and Youtube. All these are absent in the novel.

Twilight’s strong connection with the Brontes reminds me as a writer not to forget the classics. The classics can help a modern writer in so many ways. Jane Austin’s delight, insightful novels have spawned a whole industry of current novels that use her plots, including my favorite: Helen Fielding’s Bridget Jones’s Diary.

So I think it’s time for me to re-visit the classics, many of which I read when I was in my teens or an undergraduate in college. This time when I read the novels I am going to look at them not with the eyes of a reader or student, but as a writer. My questions for these works of art are: Why did they become classics, why have they lived on? And why is modern, popular culture drawing from them?

To help me with my journey, I discovered two great resources, although there are many more out there. One is Nancy Lemann’s Inspired by Literature class at The Writer’s Center. The other is Francine Prose’s book: Reading Like a Writer: A Guide for People Who Love Books and for Those Who Want to Write Like One.

I wonder as I begin this journey, or shall I say quest, what other old, but forgotten friends, like Heathcliff, I will meet along the way. And what illustrious places we will revisit together.

About Carollyne Hutter: For over a decade, she has been a freelance writer/editor in the Washington, DC area, specializing in international and environmental topics. Her website— http://www.hutterwriter.com/—will be up soon. Please visit the site to read Carollyne’s stories (including the opening chapters of Homesick), quirky essays, and nonfiction pieces. You can contact her at sayhi@hutterwriter.com.
Posted by The Writer's Center at 5:00 AM

Excellent post, Carollyne. I've read a lot of reviews and analyses of TWILIGHT but none that have placed it in relation to the literary canon this way. I'm almost curious enough to read it now.

Yes, great post. And, agreed! The movie's very gothic, very Bronte. EXCEPT. Our movie-heroine is a bit insipid for my taste. A bit bland. I wanted to route for her much more than I did. But, that said, I'm a sucker for Vampires... And, again, go YA!

Thanks, Carollyne, and thanks, Kyle, for including!

I love the gothic feel of the movie and it suits the genre. Vampiric movies are often full of gothic settings and personalities. I love the comparisons to Wuthering Heights in this post...one of my favorite classics.

Great post! Helps me understand my rather embarrassing fondness for the series, at my age! Charlotte would no doubt have approved...