Whiskers on Roses and Raindrops on Kittens: 20-plus years of Snapshots of Reasonably Accurate Writer’s Center Memories 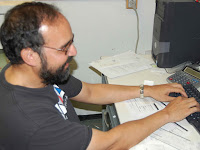 An open mic at our venue on Old Georgetown Road, with Dan Johnson and a number of other very good poets reading. I’m managing editor of Poet Lore, and notice that a poet whose work we’ve accepted, who’s almost certainly fairly unknown to the assembled crowd, is on the signup sheet. I know what will happen, and just as I’d suspected, the room is transformed as Michael Davis starts to read; the air suddenly takes on an electric, almost crystalline quality. I can almost see a collective thought bubble rising from these poets whose work I so admire, who snap to attention: “Who IS this guy?”

Another distant snapshot: Calling Lisa Rhoades to let her know that she had won Poet Lore’s Ratner-Ferber competition, which came with publication and a $1,000 prize. I could have just mailed to inform her, but the thought of making that call was irresistible. Her happiness was so contagious I felt as if I had won the prize. Clearly I had missed my calling: I should have been a game show host.

The first three executive editors I worked with were Phil Jason, Barbara Lefcowitz, and Roland Flint. They, and the editors that followed, all worked tirelessly to make a very good literary journal. I don’t think I’ve ever known anyone who gave so much, so selflessly, to the literary community as Phil Jason. It was an honor to work with him for several years. I’d be remiss if I didn’t give a shout out to two great recent managing editors, Jason DeYoung and Caitlin Hill.

The first two creative writing workshops I took were with Ann Darr, a great poet and teacher who became a dear friend. After that I joined what might be called the Rod Jellema Gang, taking dozens of workshops with him over the years. After the workshop ended at 10 pm a bunch of us would go out for drinks at a little bar in Bethesda called the Rolling Inn. We were younger then. Later I took other several good workshops with Bill O’Sullivan and Bill Loiseaux. I was also fortunate to take a personal essay workshop years ago with Phillip Lopate, who we’re glad to have as our reader for this Saturday’s birthday celebration.

Other memories: Trips to Colonel Brooke’s Tavern with Rod Jellema and Marty Galvin to hear the Federal Jazz Commission. Too many great readings to recount. I think of the 40th Anniversary Dryad Press celebration and the Jimi Hendrix anthology reading. We filled the room to overflowing to give thanks to Merrill Leffler and Rick Peabody, editors who have so generously contributed to the community.

As I’ve said many times, the workshop leaders are the heart and soul of the Center, and I’ve been honored, and humbled, to be able to work with them over the years. There are too many names left out, too many people to thank. (Hi Rose, Hi Reuben. . . .) Years ago, when Al Lefcowitz and Jane Fox invited me to join the team here, I had no idea that decades later I’d be writing in this blog. My thanks go to Al, Jane, and all the founders. Looking to the future, a big thank you goes to the Board of Directors for a great decision, selecting Charlie Jensen as our Director.

Writer’s Center Assistant Director Sunil Freeman is author of two books of poems, That Would Explain the Violinist (Gut Punch Press, 1993) and Surreal Freedom Blues (Argonne Hotel Press, 1999). More recent work is included online in The Delaware Poetry Review and Beltway, and in the anthology Kiss the Sky: Fiction and Poetry Starring Jimi Hendrix. He’s one of several long-time friends of the Writer’s Center who can be heard, with Grace Cavalieri, on the Library of Congress website: http://www.loc.gov/poetry/poetpoem.html

Tuesday Trivia Question:
What famous beat author gave a Writer’s Center reading at Bethesda-Chevy Chase High School? The event was so popular, in fact, that we had to hold it in a big auditorium.

Send your responses to postmaster@writer.org. Responses must be in by NOON on Tuesday. Winners will receive ONE $25 coupon off one multi-session SPRING workshop AND one year FREE membership to The Writer's Center.
Posted by The Writer's Center at 12:16 PM

Sunil is one of the first people I met at the center and he is always eager to help those who look lost, like I did, and he's always full of enthusiasm.