Why I Am a Board Member: Charlotte Moser

I came of age in 1960s and '70s America when community arts organizations were springing up everywhere. In the early '70s, I worked in Cambridge, Mass, where impromptu theater performances were staged in abandoned movie houses; in Carbondale, Ill., where painters and sculptors transformed old factories into studios; and later in San Francisco, where writers and artists turned old military facilities into hotbeds of creativity. So, when I moved to Washington, D.C. in the 1990s and discovered the Writer's Center, it was like meeting an old friend since it, too, was born in the 1970s with that same legacy of community activism.

The creation of community arts organizations in those days was slightly radical politically. Like the civil rights movement in the 1950s followed by the anti-war protests of the 1960s and the women's movement of the 1970s, artists marginalized by mainstream culture were energetically exercising their constitutional "right to assembly". They came together in a kind of creative solidarity wherever they could, sometimes pressuring local governments to provide spaces and sometimes just squatting until landlords surrendered. The National Endowment for the Arts, founded only in 1965, was not quite comfortable yet with the idea of supporting non-major arts groups that worked with artists outside the boundaries of formal institutions. That finally seemed to change, or at least for a time, when it dawned on people that the community arts movement was the real incubator of artistic creativity in the U.S.

I began my career as an arts journalist at the Houston Chronicle in the mid-1970s at a time when that sleepy Texas oil town was waking up to a national arts boom. Through the 1980s, I straddled the arts and journalism in Chicago and later in San Francisco. I served on a handful of award panels for the NEA, including the panel on community arts organizations. I had an NEH Journalism Fellowship to Yale. I wrote a couple of books about outsider artists, wrote a weekly art column for the Chicago Sun- Times, and was editor of Artweek in San Francisco. In between, I taught art history and raised babies.

Perhaps it was the call to action behind so much 20th-century European performance art or a general disgust with a frantic U.S. art market and art consumerism, but eventually I stopped writing about the visual arts. What took its place for me was a new passion for community building as its own art form. I now work in international development in countries where freedom of expression is often not a basic right, where creative forces are suppressed and not celebrated, where support networks for the poems, paintings or films of ordinary citizens can be clandestine and fragile. In such places, where government policies must be forged to support such activities, community building takes on a whole new relevance.

Yet, I have not forgotten what I owe the arts or that the arts have been the engine of community for me. I have not forgotten the people whose lives would be forever impoverished if they did not write that short story or compose that tune or paint that mural. This is why I have volunteered as a Board member at The Writer's Center for almost 10 years. In a region full of unwieldy and impersonal bureaucracy, the Center is a glorious example of how a humble little community organization has kept the flame of independent expression alive and well for a generation of writers.

While my Board work is pay-back to the arts and to a society that allows freedom of expression, there's another motive too. Someone asked me recently what writing I was working on. It was a fair question to a Writer's Center Board member, but the only honest answer was policy documents and e-mails. That's another reason I'm a Board member. When I get around to writing that short story, I want an alive and thriving Writer's Center to be there--for me. 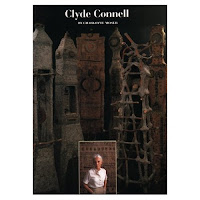 About Charlotte Moser:
Charlotte Moser is Chairman of the Board of the Writer's Center. Formerly an award-winning journalist, she is the author of Clyde Connell: The Art & Life of a Louisiana Woman published by University of Texas Press and has published widely in the national arts press. [Read a selection here.]Until recently, she was Manager, Global Online Communities for the Development Gateway, an Internet portal for development launched by the World Bank. Currently, she is a consultant for the Global Public Media Project at the School of International Service, American University. She hopes to be working soon on a media development project based in Kigali, Rwanda.
Posted by The Writer's Center at 9:52 AM