The Writer’s Center recently partnered with the Songwriters’ Association of Washington (SAW) to bring songwriting workshops to the Center. This may seem like a stretch to some, but the fact is The Writer’s Center actually has a long history of hosting musicians at its facility. Until the early 1990s this building was a community center, and in the 1960s there was a very vibrant music scene. Les Hatley, a board member of both The Writer’s Center and SAW, was an active part of that scene. In addition to his full-time professional life, Les is a musician (guitarist) and songwriter. I asked him to tell this blog’s readers a little bit more about the interesting musical roots of The Writer’s Center’s building. 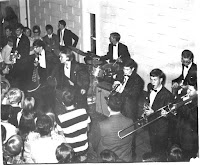 What was the music scene like here in the 1960s?

Kyle, thanks for inviting me to visit with you and The Writer’s Center blog readers. Lately there has been a good bit of interest in the Washington area music scene, especially about what it was like in the 1960s. This is the fourth interview I’ve had recently about the topic.

My music world started in the early to mid sixties, and, like countless others of my generation, was largely inspired by the Beatles. I watched them when they performed on the Ed Sullivan television show. Their music was unlike anything any of us had ever heard. We were in awe about all aspects of the Beatles, including the music, their long hair, the Hofner bass guitar Paul McCartney played, the jangly guitar sound, the “Beatle Boots,” the tight harmonies and, very importantly, their attitudes.

However, the local music scene was not inspired entirely by the Beatles or the numerous groups cast as part of the “British Invasion” which included the Beatles, the Rolling Stones, the Yardbirds, Cream, Gerry and the Pacemakers, the Dave Clark Five, the Searchers, and many, many others. We were also inspired by James Brown, Otis Redding, Wilson Pickett, Sam and Dave, Booker T and the MG’s, the Temptations, the Four Tops … the list goes on and on of rhythm & blues acts that equally inspired us. Interestingly, American rock and roll (Elvis Presley, the Beach Boys, Frankie Valli and the Four Seasons, etc.) lost ground to the British and soul acts during this period.

In fact, to a large extent there were two camps in the local music scene during the mid 1960s. The R&B bands, also referred to as “soul bands” or “horn bands” generally were large groups, usually lined up with guitar, bass, drums, keyboards and a horn section (usually saxophones and trumpets, some including trombones). Vocals were often double duty for one of the instrument players. Many soul bands also had a front man (sometimes a woman) as vocalist, and some groups would have a full band as well as several vocalists. The other camp, the rock and rollers, usually had a line up of two guitars, bass, drums and often keyboards.

We were so cool, at least in our minds. We knew we were involved in something new and exciting. We acted the part and dressed the part. For years we wore maroon colored tuxedos, and after gigs bands would show up at the Hot Shoppes at the corner of Wisconsin and East-West Highway. Just being there meant one was a player. The Hot Shoppes no longer exists, but imagine the hangout in the movie “American Graffiti” and place it in Bethesda, Maryland.

The music scene was vibrant, fresh, exciting and an awful lot of fun. Opportunities to play were plentiful, with venues from school dances to concert settings to clubs (Ok, they were bars. But “clubs” sounded cooler then). Two unique and, as it turns out, greatly influential venues, were the Bethesda Youth Center and the Wheaton Youth Center. Both Centers still stand, and of special interest to me is the Bethesda Youth Center, as it morphed into The Writer’s Center. An awful lot of music was played there.

The equipment we used in the 1960s, to a large extent, resembled equipment used today. For example, to just look at a bandstand it seems that the guitars and amplifiers look pretty much the same (then versus now). However, the electronics have advanced tremendously. Electronic tuners are standard fare now as opposed to actually tuning by ear. Amplifiers have gone from tube to solid state. In the mid 1960’s guitar players started experimenting with sound effects, primarily “fuzz tones.” If you listen to The Rolling Stones song “Satisfaction” you’ll hear the lead guitar player using a “fuzz tone”. Now you’ll routinely see guitar players use a variety of effects ranging from raw distortion to sounding like a church organ.

One of the more significant changes in equipment use was not relative to advances in electronics as much as just getting smarter. We used to plug our guitars into our amplifiers and stand out in front of the amplifiers. Guitar players still do that, but when a gig calls for any appreciative volume the amplifiers will be “miked.” That means that the real volume is fed through the main speakers, of which the players stand behind. Besides being better able to control the sound mix of the various instruments and vocalists, that also saves the eardrums of the players. Stand in front of the volume and your ears are hurt. Stand behind the volume, and the ears last longer. What that means is that a band might be extremely loud to the audience, but it can be quiet enough on stage to hold a conversation.


Tell us about the band you played with back then. What kind of music did you play? 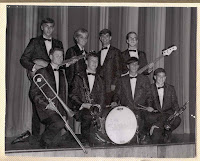 Back then I played in a group called the Showmen. We were a “soul band” featuring the music of Otis Redding, Wilson Pickett, James Brown, and many other R&B artists. We were a busy group, playing nearly every weekend at dances, shows and such. In concert settings the Showmen shared a stage with acts ranging from Roberta Flack to the Fantastic Johnny C to the Chartbusters. The Chartbusters were a local group that had a national hit record and was the group that Tom Hanks used as model for his movie That Thing You Do. Many years later I briefly played in a band with The Chartbusters drummer. Frankly, I don’t know how good we were in comparison to other groups, but we were certainly one of the better known groups. We need to give a lot of credit for our success to the Showmen’s bass player, Tom Carrico, who was also our manager. Tom made music his career, which included managing acts such as the Nighthawks, Billy Price and, for about a decade, Mar Chapin Carter. Several of us Showmen, along with former members of the Velours and Lawrence and the Arabians, let go of other music projects and formed the Blue Dog Band in 1990 and had a great 11 year run until 2001. A highlight gig of the Blue Dog was playing as part of an American Bandstand 40th Anniversary concert with the Coasters, Gary U.S. Bonds and Lou Christie. We still occasionally get together to play a gig.
***

In Part II, Les discusses Nils Lofgren's performances at what is now The Writer's Center.

Les, a CPA, is Managing Member of Hatley Insurance Consulting, LLC (HIC), primarily consulting with state insurance regulators about solvency concerns of insurers. His practice takes him to locations all over the United States. Prior to forming HIC he worked for several different insurance groups, was the Director of Financial Analysis for the National Association of Insurance Commissioners and worked for a couple of consulting firms. However, career does not get in the way of dedicating weekends to family (including 3 beautiful grandkids) and playing music. Les has been an active musician since 1965, and continues to play a variety of genres including rhythm & blues, rock & roll, contemporary folk and contemporary gospel. His first solo CD is Second Chair.

When not traveling for HIC, spending time with the family, or playing music Les enjoys serving on the Board of Directors of The Writer’s Center and the Songwriters Association of Washington.
Posted by The Writer's Center at 9:00 PM

Great stuff Les! I enjoyed reading your interview. I also had no idea that your background was so interesting! I guess I'm not surprised.

Very interesting! I grew up in Bethesda at about the same time. Played with various bands including "The Flat Tops", "The Majestics" and "The Monarchs" -- all B-grade bands -- but I still have fond memories of playing at the Bethesda Youth Center, local parties, high school talent shows, assemblies & dances. "Those were the days!!