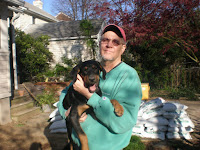 Two weeks ago, I read an article written by Charles McGrath for the New York Times titled "The Artful Codger." At that time, an unusual level of frustration and self-doubt blanketed my writing career. Lit-mag rejections crowded my mailbox, my collection of linked stories had sparked little interest in the publishing community and that endless task of editing and re-editing, preparing and sending, editing and editing and editing… had begun to wear me down. Hard work is not always enough, despite the optimist’s mantra. McGrath's article spoke of aging writers and their changing styles and levels of output. McGrath tried to lay to rest the myth that our best creative work is left behind with our youth. I am in my late 50’s. I’ve written stories since my teens. I’m not sure I’ve left much behind. I don’t have an MFA. I have stories to tell and I tell them, simple as that. My reward: two copies of the literary journals that choose my stories for publication and the occasional assurance that my work has value. Carpentry work has paid the bills for the last thirty years or so.

When I was a boy, the men in my life, friends and family alike, earned their livings with their hands. Plumbers. Pipefitters. Tile men. Railroad workers. Coal miners. Farmers. Fishermen. My father was the only man I knew who read anything beside a newspaper. He valued education. He loved to read and it turned out, so did I. I liked school, it came easy. I did well. The prize was college and some windows did open up for me while I was there. Free thought. Argument. Questions. Answers. But I still lived in the world of ‘real work’ and I could not help but follow the footsteps of those I knew.

I worked construction jobs during my high school summer vacations, I’ve never really tried my hand at much else. I like working outside, despite the weather, and being part of building structures that remind me of the men I'd come to know and respect. Carpentry suited the ‘cowboy’ in me. Like Salinger said, “Raise High the Roofbeam, Carpenters”.

John Hershey compared the process of writing a story to building a house. Writers build the skeletal frame and cover it with details of flesh and bone; carpenters do the same. That metaphor stuck with me.

McGrath’s article made me feel good. He dispelled the notion that age diminishes us. Sure, my bones ache but not all the time. When the sun’s hot and the day’s short and the last rafter’s almost set, I feel strong, new, and I remember that feeling. I don’t kid myself, there’s an end, my body won’t hold up. But I get that same strong feeling writing, workin’ those words. What changes, in all our lives, is the balance. Sometimes we need reminders. Charles McGrath reminded me. Maybe, this blurb will remind you.

My first published story told of an old Carpenter forced to address his prejudice against youth and the fear that gripped his future. More published stories followed, I’m not very prolific, my first drafts are longhand and several edits precede each story’s placement on the computer. I’m terrible at sending out. I've linked a dozen stories into my first collection titled ‘MARIS STELLA & other stories’. Currently, I am at work on my first novel and circulating five stories on the lit-mag circuit. A half-dozen new stories beg for my attention. Another half-dozen lie waiting in various stages of completion. None of them is ready to send out. In 2006, I was awarded a fellowship to the Virginia Center for the Creative Arts. My time there was bliss, no chores, no demands, no schedules. I hope to go again, after the completion of my novel’s rough draft.

I continue putting forty hours a week on the clock. I drive a full-size work van that leaves my house every morning at 6:30. I've built stuff in neighborhoods all over the city and suburbs. My dear wife has stuck by my side for thirty years. We’ve raised two college-educated daughters. I’ve restored our home, a ramshackle 1920’s two story bungalow, in the spare time of living in it for twenty-three years and I get two weeks paid vacation per year. I have a second job. I am a writer and writers write. Here's how.

Domestic life: I located someone who loved to read and appreciated good writing and latched onto her and never let go. Don't believe those who say you have to suffer starving artist time, that there’s only room for you, the writer, and your muse. A life of single-minded pursuit offers little comfort and less financial reward.

Education: I read and read and read. I workshop my stories and wear my thickest skin. I attend writer functions, conferences, readings, classes, anything. I make time to do all of the above. No excuses. No complaints. I take action to improve. I cannot learn too much.

Network: I helped form a writers group. Groups allow new perspectives on one’s work and free constructive criticism. My group stemmed from a workshop at The Writer's Center. Our organizing founder culled six writers from the workshop and invited us to her home. We talked about what we wanted from a group, set up our conditions and called ourselves a writer’s group. We meet once a month, rotate submissions and workshop our stories. We organized eleven years ago. The impact on my writing is immeasurable. There are seven members now, and all have logged significant successes since we formed.

Make time: I utilize vacation time. I organize my schedule and take blocks of time devoted exclusively to writing. I always use the week between Christmas and New Year’s day to catch up. I work for sympathetic bosses who understand what's needed to work creatively and afford me the time off as needed, without pay of course, except those two weeks and a handful of holidays. I try to schedule time away at retreats and conferences.

Discipline yourself: My writing schedule consists of early Saturday and Sunday mornings (I wake around 5 a.m. and work in my basement workspace until noon or whenever my dear wife bangs the floor above my head as reminder that there are other things that need my attention). I work two or three nights a week for several hours or until I start to nod at my desk. My life prohibits an output of a thousand words a day like some might insist is the minimum requirement to call yourself a writer. If I come up with free time, I read or write.

Stay current: I subscribe to three writing magazines. The Writer, Poets and Writers and The Writer's Chronicle. These mags are my industry resources. My shelves are stacked with countless instructional and philosophical books on writing. Most of the titles are forgotten, all the copies are dog-eared. I force myself to use the internet. I study websites of literary magazines and websites of writer’s resources.

And I remember ‘The Artful Codger’ that lives in all of us and relish my powers as a creative writer even as I worry about losing them.

***
Jim Beane lives in Hyattsville, Maryland with his wife of thirty years. Carpentry work helps pay the bills. His stories have appeared in the Baltimore Review, Scribble, The Long Story, Potomac Review and the anthology DC Noir, edited by George Pelecanos. The Virginia Center for the Creative Arts granted him fellowship in 2006. His story collection Maris Stella & Other Stories is looking for a publisher.

Jim worked his first construction in the summer of 1968. He settled on carpentry as his trade after college and has spent the years since practicing that trade and learning the craft of creative writing.
Posted by The Writer's Center at 7:00 PM