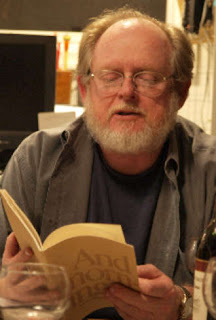 Just a brief post today. I wanted to share the great news that a certain Writer's Center workshop leader--Robert Bausch--is the recipient of the 2009 Dos Passos Prize.

Here is the citation for the award:

Recipients of the prize are American creative writers who have produced a substantial body of significant publication that displays characteristics of Dos Passos's writing: an intense and original exploration of specifically American themes, an innovative approach to form, and an interest in a wide range of human experiences. The jury unanimously agreed that as a writer, [Robert Bausch] embodies these criteria, amazing us all with the fictive range of [his] body of work. One juror wrote: "Bausch has the wayfaring kind of imagination that leads him not only to strikingly different stories and characters, but also to differently imagined ways of telling each different story. It is hard to believe the same writer gave us the darkly compelling and wildly inventive The Lives of Riley Chance who gave us the absurdly comic and risky Almighty Me."

Take a look at his Web site right here.
Posted by The Writer's Center at 7:00 PM