Review Monday: Is Life Like This? A Guide to Writing Your First Novel in Six Months 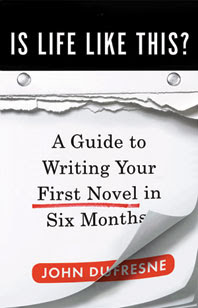 Having little formal training in writing prose, I came to John Dufresne’s Is Life Like This? A Guide to Writing Your First Novel in Six Months as an interested skeptic. Six months? Reading this guide, I realized how many erroneous preconceptions I had of the novel-writing process. The method Dufresne lays out jettisons the idea of sitting down, starting at page one and plowing through page after chronological page until you get to the end:

“Writing a novel does not proceed in a linear fashion even if the novel itself eventually does. Writing a novel is messy; it’s labyrinthine at times; it’s recursive and indirect; it sputters and lurches and frustrates and generates.”

In mapping out weekly assignments for the novelist, Dufresne advocates extensive up-front research and thinking to develop characters, their motivations, histories, backgrounds, influences and anything else that will help you understand what makes your character tick. It isn’t until Week 13 that Dufresne assigns the task of writing the first scene. But by this time, you know your novel’s characters, its setting, point of view, theme and, finally, some idea of a plot.

Early on, in the section “In the Beginning Were the Words,” Dufresne offers an extensive variety of examples of how one can start a novel. Some of the examples Dufresne provides tend to hyperexplain the process of how A can lead to B, followed by C, steering towards D, resulting in E, and so on. But I can see, specifically by way of the hyperexplanation, the usefulness of such tangential thinking towards the writer’s goal of a well-developed character or scene.

By providing examples from his own writing and quotes by other writers on the subject of novel-writing, Dufresne puts the first-time novelist more at ease with the process in an effort to help him/her see that any fear or stumbling block can be overcome: mainly by writing through it. “Doubt and uncertainty are not only a part of, but are fundamental to, the writing process. Not knowing is crucial to the making of a novel. It sets the wonder in motion.”

Once the first draft is complete – bedraggled though it may be – Dufresne says the writer must understand the real novel emerges from the editing process. Dufresne writes, “Revision is not a matter of choice. Now that you’ve got black on white, you’ve got something to work with. Now the real creative writing begins.”

What is clear, from Dufresne’s Is Life Like This?, is that the prospective novelist must first be in love with the process of discovery that comes with writing and revising. Dufresne cites Elie Wiesel, “Writing is … like sculpture, where you eliminate to make the work visible. Even those pages you remove somehow remain. There is a difference between a book of two hundred pages from the very beginning and a book of two hundred pages which is the result of an original eight hundred pages. The six hundred pages are there. Only you don’t see them.”

Bernadette Geyer is a poet and freelance writer/editor in the Washington, DC, area. Her poetry chapbook, What Remains, was published in 2001 by Argonne House Press. Geyer's poetry has appeared in Hotel Amerika, The Marlboro Review, South Dakota Review, The Midwest Quarterly, 32 Poems, The Evansville Review, and other literary journals. Geyer's non-fiction has appeared in Elle.com, Sustainable Development International, The Montserrat Review, World Energy Review, and Marco Polo Magazine. Find her online here.
Posted by The Writer's Center at 9:00 PM