On October 29th, The Writer's Center welcomes Terese Svoboda and Wendy Mnookin for a special Thursday evening reading. Terese will also be giving a one-day workshop, What Another Genre Can Do for You, on Saturday, October 31st. That's not as spooky as it sounds (okay, sorry for that). There are seats still available for the workshop, if you're interested in seeing this multi-talented, genre-bending author. She will read from her book of poetry called Weapons Grade. 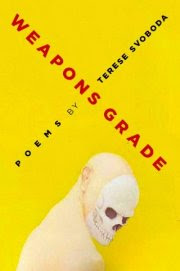 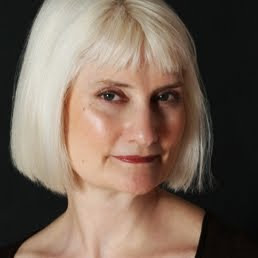 Terese Svoboda is author of several novels and collections of poetry, including The Tin God, All Aberration, Laughing Africa, and Treason. Her work has appeared in The New Yorker, The New York Times, The Atlantic Monthly, Slate.com, Bomb, Lit, Columbia, Yale Review and The Paris Review. Her honors include an O. Henry for the short story, a nonfiction Pushcart Prize, a translation National Endowment for the Humanities fellowship, and a PEN/Columbia Fellowship. Visit her online here.

Following is a mini-interview between The Writer's Center's bookstore manager, Janel Carpenter, and Svoboda.

In Trailer Girl, your background in poetry is evident by the brevity and density of the language. Was it difficult to write prose after poetry and vice versa?

I write both at the same time. That is to say, I find poems in the margins of novels, plots struggling to get out of poems. I like to talk to both heads when I can, to check to see if they're still screwed on.

Not to harp on your cross-genre status, but do you have a way of determining whether poetry or prose would better convey a story?

A scene will show up that unfolds rather than implodes and it’s prose. Or else I have to do it the hard way: the novella, Trailer Girl, began as a poem, and was published as a short story, then I converted it to a screenplay but soon realized I didn’t have the energy to hustle it, so I turned it into a novel. After it was published (jammed in with a lot of short stories, it became a novella), it was turned into a night of dance. Persistent inspiration.

The characters you write about in Trailer Girl and Other Stories have mostly been through some sort of trauma. Do you find it difficult to find original ways to write about trauma?

Something’s always at stake in a story, whether it’s a knife in the back or a pregnancy. Beating a story into shape makes it cry out. Originality is highly overrated.

In your story “Cave,” I found it delightful that the two characters (the Greek woman and her lover) intrude in on the narrators’ “no-fun” life. As a writer, I often feel my characters are intruding into my life. Was that your intention? Or did you have another purpose in the unique narration style?

This is a case of parallel intersecting plots: the Greek man ends the tempestuous relationship by freezing to death, the male of the other couple disappears from the life of the narrator. What happens during a story is less important than its overarching metaphor. But to make the metaphor without arching too far or being seen, like some kind of icky rainbow--that's the trick.
Posted by The Writer's Center at 9:00 PM

What a great interview and a new-to-me poet/author. I really enjoyed learning that I'm not the only one working in both prose and poetry.

I've added a link to this interview on my blog.