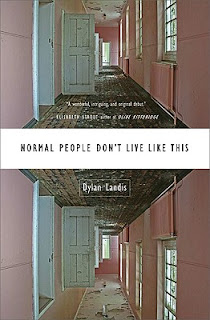 Is Dylan Landis’ debut, Normal People Don’t Live Like This, a collection or a novel? It’s a fair question, and the book jacket refrains from answering, preferring the ambiguous “debut” where the label would usually be affixed. As this particular work blurs the lines between “novel” and “short story collection,” let’s call it a “novel-in-stories.” Each story can stand, unwavering, on its own two feet, and yet the collection as a whole tells a grander story; one that, when read cover-to-cover, still has a sense of movement, of working towards a greater understanding. What binds this work together is a cluster of women, most notably our main protagonist, Leah—in whose story and perspective we spend the most time—and her mother, Helen.

Leah is introduced in the second story in the book, “Fire.” She’s in middle school, and we are dropped into her world of fairly standard teenage fare. What Landis does well here is crafting individuals: Leah, tapping things thrice whenever she’s nervous; Helen, exhibiting her oppressive concern for her daughter’s well being by scaring her with specific stories of rape and murder: “He used a hammer,” leading Leah to wonder if the hammer was for the rape or the murder; Rainey, a beautiful bully who entrances Leah, even as she’s repelled by her cruelty. When Leah realizes that another bully, Chris, has flaws, Landis doesn’t simply state that Leah’s fear ebbs, she writes: “She thought about these things, and in thinking them she ran a tender finger along the edge of her fear.” It’s no general calming; it’s Leah’s specific experience described as only Landis can. And Leah progresses through the stories. Though she is never devoid of a hunger for connection, never abandons her triple-tap in times of crisis, she is still growing and changing, until the final piece “Delacroix,” in which she leaves us literally under Paris, in the sewers, taking in the world that Leah is still just beginning to understand, but with a promise that she has at least taken her first steps.

In one of the most touching segments, the title story “Normal People Don’t Live Like This,” we get our first section from Helen’s perspective. She confronts a fellow mother, Bonita, with a handful of clothes and sundries that their daughters have pilfered together. The disarray of Bonita’s place—the dirt, the grime, the haphazard arrangement—is a clear reflection of how this house is run: by a slew of teenage girls. Helen is simultaneously revolted and enchanted, and it is in this piece that we really begin to get into Helen as a character, to see her flaws and her yearning, so she is no longer merely a domineering, anorexic mother. She is beautiful and pitiable and perplexing. Each story reveals more about her, and she helps carry us through to her own final section, wherein we realize this book is as much about Helen as her daughter, and that she too has reached a turning point. Landis ends the collection before we fully dive over that edge and into a new life for Leah and Helen, but the promise is somehow enough.

Landis fulfills us. Each story builds off the previous, and builds to the next. Each story is a morsel in itself; it leaves you full, and there’s a whole tableful to gorge on. This is what Landis does, and does so well, and had she written us a standard novel, we might have become fed up and walked away. Instead, we have a contract from the start—we will be given small, digestible stories from multiple points of view, and we will want to come back and read them all—and we allow ourselves to sink into this world, to become immersed in these women, never quite sure where Landis will take us next, but trusting it will be beautiful and haunting. Read it one story at a time. Read it as a novel. Read it out of order. Read it upside-down. Just read it. You’ll see what I mean.


Caitlin Hill is the Managing Editor of Poet Lore and and MFA candidate at American University (fiction). Her fiction has appeared in So to Speak. She loves the Red Sox (even though all they ever do is break her heart).
Posted by The Writer's Center at 9:00 PM

Gorgeous review and this sounds like a fantastic debut novel in stories. Thanks for the recommendation.