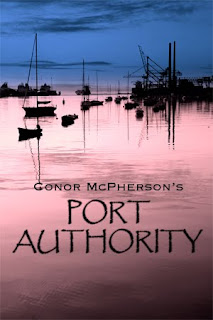 The Quotidian Theatre Company is getting very good reviews for its production of Conor McPherson's Port Authority, which runs at The Writer's Center through November 22. Footlights DC, a great community resource for area theatre lovers, includes excerpts from two recent reviews, posted below. As a special membership benefit, Writer's Center members get discounted $10 tickets to Quotidian Theater Company productions. Also, scroll down to learn about a special discount The Theatre Lab School of the Dramatic Arts is offering Writer's Center members on a Writing for Sitcoms workshop with David Emerson Toney.

Quotidian's small but mighty production very well done. ...it's a credit to McPherson's humane, observant pen -- and to the three adept actors who illuminate his material in Quotidian Theatre's local premiere of his 2001 play -- that even when nothing much is happening, it feels like everything's at stake. ...the epiphanies here are like atoms, miraculous for their smallness and ubiquity. McPherson knows that insight is more likely to arrive in the frozen food aisle than on a mountaintop, and that wherever we are, we experience these shattering moments privately. ...McPherson's work has been all over D.C. stages recently. Scena's production of his "Dublin Carol" closed last month, while Studio staged "The Seafarer" last January and "Shining City" 14 months before that. Quotidian did its own "Dublin Carol" only a year ago. Given all that, it's surprising that "Port Authority" took so long to find its way here. That's its arrived in such lovingly curated, brilliantly performed fashion is the one happy ending amid a show that otherwise has no use for such dismissive reductionism.
-- Chris Klimek, DC Examiner

Port Authority is well worth a trip to The Writer's Center in Bethesda for its stellar writing and three strong, complex performances from Flanagan, Beall, and LaRocque. This story of love, loss, and the life unlived is theater at its most captivating.
-- Ben Demers, DC Theatre Scene


The Area Premiere of Conor McPherson's

Performances on Fridays and Saturdays at 8 p.m.,
Sundays at 2 p.m., with an added Matinee on
Saturday, November 21st at 2 p.m.

PLEASE NOTE: This play contains adult themes and language and is not recommended for those under 17.

*Member of Actors' Equity Association, the Union of Professional Actors and Stage Managers in the United States, appearing under a Special Appearance Contract.