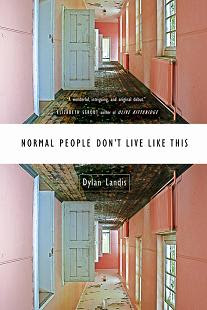 Dylan Landis has published fiction in Bomb, Tin House, Best American Nonrequired Reading and elsewhere, and has won the California Writers Exchange Award from Poets & Writers, the Writers@Work Fellowship and special mention for a Pushcart Prize. A former journalist, Landis covered medicine for the New Orleans Times-Picayune and interior design for the Chicago Tribune, and has written ten books on decorating and other subjects. She lives in Washington, D.C.


Caitlin was given the opportunity to ask Dylan all those burning questions that came up while she was enjoying the book.  The interview is below.

Did you start off this project knowing you wanted to write a novel-in-stories, or were they separate short stories that began to come together, or were you planning on a novel or something else entirely?

I didn't mean to write this book at all! I was trying to fix a novel about my main character, Leah, at age 22, called Floorwork, which looked at one time like it might sail through the stratosphere. Four agents wanted it, but when it didn't find a publisher I realized I needed a deeper grasp of Leah's past--her adolescence, her family, her yearnings and motivation, the seeds of her sexuality.


I'd just started writing short stories—about Leah, to know her better—so that's how I researched her, and her mother. I wrote her at twelve, thirteen, fifteen. The stories got published; some won prizes. At some point I realized: here's half a book. And with every story I tried a new assignment. Write in third person. Write in past tense! That was weirdly scary. Write about Leah's mother. Write about sex, death or God without using clichés. Write about a man—that was the final story.


Rainey is a fairly minor character in the life of the piece as a whole (though her presence lingers long after she vanishes from the narrative). Why did you choose to start the collection with Rainey’s story?


When you meet Rainey, in "Jazz," she's half-trapped beneath her father's best friend. He's thirty-nine. She's thirteen. She thinks she thinks she seduced him with her sexual power, but when she says, "Richard, get off," he keeps her pinned, exposes her breast, and goes farther. Is it rape? She doesn't know. Is she powerful or powerless? She doesn't know.


What if you'd first met Leah, in"Fire," which opens with Leah so frightened by Rainey's bullying that she lashes out? You'd have such a neat handle on Rainey: You'd meet her as a bully, and then, when you see her molested, the bullying would make sense. I'm wary of things making sense. Flipping the stories seemed to stir up silt. Silt is what you're after in fiction, right? Now the book opens with the power question. What is power, for a teenage girl? If Rainey thinks she's powerful in "Jazz" but is in fact a victim, then who has power in the bullying scenes? Who has more or less power than she believes throughout the book?


You mentioned power, and figuring out who has it, or lacks it, throughout the book.  While reading, I kept thinking about issues of "control:"  Helen's issues with food and need to decorate her space, Leah's OCD, Bonita's seeming lack of control over her girls and her comfort with it (and the power that has over Helen), Rainey's sexuality and the control it gives her and takes away, etc, etc.  Are there other themes or issues that you feel tend to come up more often than not in your writing? Similarly, are you typically interested in examining women's lives, or did that just spring out of your interest in understanding and exploring Leah?

I write stories to find out who a character is, and how her life is about to shift—not to explore issues. But I do invest a piece of myself in every character, and then distort or exaggerate or invert that piece until it becomes, I suppose, a theme (much as I dislike the word). Control, power, all aspects of sexuality, mothering and fathering, good girls, bad girls, intense friendship, guilt, grace, violence, the redemptive power of art. I'm interested in characters who can't quite articulate their feelings—it creates an interesting box for me to work within.


And it simply took a long time to start writing about men.  I'm enjoying it immensely now, but I still know women better.  Testosterone—what is that?

As an embarrassingly inconsistent writer, I am always curious about other writers' habits.  Do you write every day?  Do you have requirements for yourself, such as a particular writing space, a time of day, specific music or rituals you engage in to get you into the writing headspace?

I have nerve damage in my hands, so either typing hurts, or the keyboard and pen feel high-voltage, or both. Unfortunately, when work presents itself I want to do it now, and I'm a compulsive reviser. So the problem lies in not writing, or at least in not typing. I'm doing three  online interviews this week and reading a friend's manuscript. I love revising, even when the work goes slowly and badly, as it usually does. I love typing. It's the closest I'll get to playing the piano. I forget to eat. If I had rituals I'd forget them too.

What I'd really like to do for a ritual is chain-smoke, but that's not happening.

It sounds like I work all day. I get hurt that way and have to stop, so there's no routine whatsoever. I read. I talk to writer-friends about writing. I'm helping a poet with cancer launch her book; any ideas? I'm fairly distractable—by my husband, consignment shops, MAC stores, any opportunity to fly to LA, coffee, Facebook, the cat, newspapers, bookstores, readings, good interview questions, and the computer. Just no TV.

What other writers or artists inspire you?  Any books you return to over and over?

I revisit Mystery and Manners by Flannery O'Connor, waiting for the part about how an act of violence triggers the moment in which grace is extended to a character. For grace, if you are not religious, think: a moment of transcendance. After Flannery, I sometimes reread Angels by Denis Johnson, to see grace made flesh by a different writer. It's almost unbearable.

I recently read Song of Solomon by Toni Morrison for maybe the 11th or 12th time and I still couldn't teach that book. It's so layered and complex. It continually teaches me about Story. I go back to As I Lay Dying to learn about point of view—I've been trying to diagram the POVs in that novel, but the diagram is nonsensical to anyone but me. Cormac McCarthy I'm slowly rereading in chronological order. I thought I was rereading him to keep myself focused on undertow, but no, this time through I'm watching for some of the brushstrokes he uses to reveal character.

My memory's lousy. That's partly why I reread: to hold onto things.

I just read The Bird Artist, by Howard Norman. It left me breathless with its beauty. How anything can be  so still, yet so urgent, is beyond me.

Are we going to see Leah's novel one day?  What's next for you?

I'll revise Floorwork, transpose it from first to third. A chapter that ran in the New Orleans Review got special mention for a 2008 Pushcart Prize, and Normal People has gotten such a good response that I suppose Floorwork, as a sequel, could conceivably get a second look. But revision would be a pleasure. I'll do it whether my agent feels hopeful or not.

First, though, I'm deep in a new novel about a woman named Mary Mallon who came here from Ireland, age fifteen, in 1883; became a terrifically good cook; and was quarantined in 1907—as  Typhoid Mary. She hated that name, which the press gave her, and she denied to her death that she carried the typhoid germ. Only three people died due to contact with her—hardly an epidemic, though she tested positive. Did she know, deep down? And what does it mean to be guilty or innocent? Clean or unclean? What does it mean to be—even if she disbelieved it—that powerful?

Posted by The Writer's Center at 9:00 PM