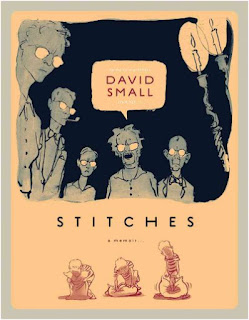 
Graphic novels rarely interest me. The last one I enjoyed was Loeb and Sale’s The Long Halloween, but that’s mostly because I have a man-crush on Batman. I’ve tried reading the classics of the genre – Alan Moore’s Watchmen, Frank Miller’s 300 – each time finding the brilliant pictures and gravity-mocking action off-putting, their kinetic panels leaving little to the imagination. So when I picked up David Small’s Stitches, a critically acclaimed “autobiographic” novel about an abused boy who grows up to be a famous artist, I thought: well now, this might be interesting.


Small’s childhood makes Dante’s descent into the inferno look like a mad lib.  The story unfolds in 1950s Detroit, a city on the knife’s edge of collapse.  Small’s father, a radiologist, floats through life in a haze of preoccupation and pipe smoke.  He seems more like a houseguest than a father, barely uttering more than a few words to his wife and sons.  Small’s mother, the more outgoing of the pair, bashes cupboard doors closed in a passive-aggressive attempt to be noticed and, hmmm…I feel like I’m forgetting something.  Oh yeah!  She turns out to be a closet lesbian who burns Small’s favorite books for no apparent reason.

Not to be outdone, Small’s grandmother, a psychopath who applies a Midwestern work ethic to torturing her family, makes Dick Cheney look like Shirin Ebadi.  She eventually goes insane, locks her husband in the basement, tears off her clothes, and tries to burn down her own house.  Hoorah!  Small’s writing style is matter-of-fact, matching the desolation of his spare, black-and-white watercolor drawings; when his grandmother has her breakdown, he tells it like it is: “A neighbor saw the smoke.  Saw her dancing around and phoned for help.  Papa John was saved and Grandma was taken away to the state insane asylum.”  Mental illness does to Small’s family what the Hindenberg did for luxury blimping.

The coup de grace comes when young Small develops a lump on his neck.  At first his parents ignore it; they’re social climbers who’d rather take a spin on their rich doctor friend’s yacht (on which are raised flags festooned with pictures of martini glasses) than attend to their son’s health.  But they finally succumb to their friend’s pleas to cut out the offending cyst.  After a series of operations (assisted by a ghoulishly-named anesthesiologist, Dr. Blyss), the doctor succeeds in removing the growth, though he extracts a few of the boy’s vocal chords in the process.  You got it: the kid’s now a mute.

If this were fiction, even the casual reader would note the ham-handedness in the boy’s no longer having a voice in what happens to him.  After all, the only sound he can make after the surgery is the guttural “Ack!” of a Velociraptor.  But when clichés occur in reality, they take on a malevolence fiction could never muster.  Inasmuch as this book seems bent on depressing its audience, this plot point works splendidly.  Spoiler alert: it’s all downhill after the operation: eventually Small ends up an orphan living in a dilapidated drug den.  Like you didn’t see that one coming.

But if there is a bright spot to the book, Small’s haunted drawings made an impression on this reader.  In one sequence, a fetus floating in a jar of alcohol comes alive and chases the boy through a hospital and, you know, that’s just cool.  But there is no heart here, just a web-laden chest cavity where a boy slowly rots.  Note to anyone who doesn’t want to die a little inside: leave this book off your Christmas list.

Born in the foothills of the Appalachians, at the headwaters of the Ohio River, and at the navel of the known universe, i.e. Columbus, Ohio, Chris Hobson has published nothing since he spent way too much money getting a fancy-sounding degree.  A late bloomer, none of this bothers him.  He has written several screenplays that went nowhere and a gigantic novel that collapsed on itself one night and died of asphyxiation.  When he’s not working hard at his public relations job, he enjoys watching movies, hangin’ with his wife, and writing.