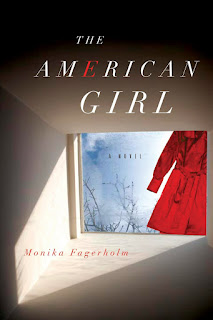 In recent years, Scandinavian writers have provided readers around the globe with some interesting novels—novels that, to the overwhelming delight of their publishers, also happen to sell tons of books. Names like Per Petterson (Norway), Henning Mankell (Sweden), and Stieg Larsson (Sweden) come to mind. Go to Stockholm and you can even take a tour of Larsson's "fictional" city. But with the booming worldwide popularity of especially Mankell's and Larsson's detective fiction, the question arises: Is there room for other, less traditional Scandinavian voices to break through in the United States?

That's a question Finnish author Monika Fagerholm's newly released novel The American Girl may soon answer. Widely acclaimed in Europe, Fagerholm, who is part of the Swedish-speaking minority in Finland, is not yet a household name in the United States. Though her novel Wonderful Women by the Sea (1997) was published in the U.S. and was even shortlisted for the prestigious International IMPAC Literary Award, it's The American Girl and next year's sequel, The End of the Glitter Scene (which has been nominated for Scandinavia's most important literary award, the Nordic Council Literature Prize, and will also be published in English by Other Press), that may truly bring her widespread American recognition.

Like many popular Scandinavian novels to reach these shores, The American Girl uses some elements of the mystery genre in its genetic coding. But let me be clear at the outset: this is a book that defies convention and is difficult to categorize. If you think you're picking up a quick, easy beach read—if you think you're picking up a novel modeled on Mankell—well, you're absolutely, definitely not.

At the book's start, the American girl, Eddie de Wire, has drowned in a marsh in the "district," a region near Helsinki populated with some fairly strange, insular characters, and Eddie rapidly becomes part of local lore. Enter Sandra Wärn, Sandra's father—referred to as the Islander—and Sandra's mother, Lorelei Lindberg. They move into the large, mysterious house the Islander builds for Lorelei in the district—"the house in the darker part of the woods." One day Sandra finds a lone girl, Doris Flinkenberg, sleeping at the bottom of their empty swimming pool. Like Sandra, Doris is an odd girl with a troubled past, and Sandra knows that it was "the right time for the first meeting, one of the most important meetings in Sandra's entire life."

This meeting marks the beginning of the girls' friendship--a friendship that serves as the driving force of the novel. Though The American Girl toggles back and forth between characters and scenes—and does so in a way that will challenge you at times—the novel is, ultimately, their story. They are smart, imaginative girls attracted to solving the mystery surrounding Eddie de Wire's death, and together they form a deep bond that is only severed by a tragedy involving one of the girls.

The American Girl is, at its core, not a mystery but a coming-of-age story, a kind of YA novel for grownups, combining the breathless immediacy of young adult literature with the darker knowledge of adulthood you find in, say, the best of Joyce Carol Oates' novels. To be sure, this book is decidedly not a young adult novel. Far from it. It is a sprawling, slowly unraveling narrative that would probably be a slog for young readers. For adults, however, there's much to appreciate. But it remains to be seen if it can generate the kind of hyper-buzz that recent Scandinavian novels have generated here. Still, Monika Fagerholm's is a unique voice that deserves a wider readership.

And with translator Katarina E. Tucker, a past winner of the American-Scandinavian Foundation Translation Prize, her work gets a loving and faithful touch. American readers who prize the pleasure in a good novel told slowly, who chew thoughtfully on the language and the structure of stories told unconventionally, may find in The American Girl a rare treat—to be continued next year in the sequel.
***

Kyle Semmel is the publications and communications manager of The Writer's Center and administrator of First Person Plural. In addition to his work at TWC, he is a writer and translator (under the name K.E. Semmel) whose work has appeared in Ontario Review, The Washington Post, Aufgabe, The Brooklyn Review, The Bitter Oleander, Redivider, Hayden’s Ferry Review, and elsewhere. His translation of Jytte Borberg's classic Danish story "Englene" will soon appear as "Angels" in The New Renaissance. His interview with internationally acclaimed poet Pia Tafdrup is in the current issue of World Literature Today. For his translations of Simon Fruelund’s fiction, he received a translation grant from the Danish Arts Council.
Posted by The Writer's Center at 9:00 PM