Monday Review: Aliens in the Prime of Their Lives 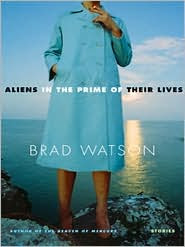 Aliens are adult men estranged from their families. They are also young, lusty women road-tramping. Aliens are women who abandon their lives for their kooky dreams, and they are also strange children who peek in windows from darkened trees or watch you like a feral animal behind pool fences. Aliens are people whose lives ache from isolation or separation from that which they most covet. Or that’s the way it is in Brad Watson’s new book Aliens in the Prime of Their Lives, a solidly built collection of short stories.

By far, the best story in this collection is “Visitation,” a story free of any artificial resolutions. It tells the story of Loomis, who travels every three weeks or so to see his young son who lives in California with his mother. The father and son stay in a run-down motel and make cursory visits to San Diego tourists’ sites, trips that usually lapse into awkward conversations that go nowhere. These visitations seem to prove to Loomis what a terrible parent he is. Their interactions are set against the backdrop of the other motel customers—the uncouth, “Gypsy” couple who scream and seemingly abuse their children.

Other stories are filled with the same kind of sadness, but often Watson finds the humor within. “Vacuum” is told from the perspective of three young brothers who scheme to make their mother happy as she goes through the first painful stages of divorce. But they’re young, clueless boys, and their schemes are marked with missteps and odd outcomes. In “Are You Mister Lonelee?,” the narrator struggles with what he calls the death of his wife, but in reality she has run off to join Majestic 12, a kind of hybrid art collective/biker gang.

These stories also take risks in their narrative form. In the novella-length title story, Watson coddles the reader for nearly twenty pages with a story about teen pregnancy before unexpectedly dropping in the book’s only actual appearance of visitors from outer space—or at least they claim to be. At this point, the story ceases its banal teen pregnancy narrative to explore much more interesting territory. And “Ordinary Monsters,” the most daring piece in the book, is not a story per se but a collection of short-shorts about odd events—a woman discovers a group of gorillas in her woods, an elderly couple sips scotch as their plane shears apart, a pack of wild pigs are seemingly possessed by the spirits of their human hunters.

There’s much to like in this collection—poetic prose, top-notch storytelling. Watson looks upon the weird and the ordinary with the same artistic eye that made his first collection, Last Days of the Dog-Men, so good. But in the end we still know these characters, these aliens, as Watson writes in the coda to “Ordinary Monsters”: “We were all just normal people, before we changed. Pretty much locked into our lives.”
***

Jason DeYoung’s fiction has appeared most recently in Painted Bride Quarterly, Gargoyle, and Harpur Palete.
Posted by The Writer's Center at 10:47 AM