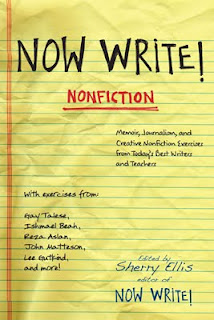 Somewhere between Bird By Bird by Anne Lamott and The Art of Fiction: Notes on Craft by John Gardner comes the new Now Write! Nonfiction. While many writers may have moved beyond the support provided in some of the classic workshop books like Bird by Bird – others find the academic writing in Art of Fiction too lofty and far removed from the act of writing. (Who isn’t put off by the idea that The Grapes of Wrath was not destined to be a great book because it used the classic stereotypes of a “bad guy” – instead of making all of the characters complex and well rounded)?

Similar in style to books like Lamott’s Bird By Bird or Goldberg’s Writing Down the Bones: Freeing the Writer Within, Now Write! Nonfiction approaches topics in memoir, journalism and creative nonfiction. The book contains short one to two page chapters about a concept in writing, and then a quick specific exercise to help you explore that concept. The chapters are written by various popular nonfiction writers, like Lee Gutkind, the father of creative nonfiction, Gay Talese, Dinty Moore, and American University MFA professor Myra Sklarew.
This is the second Now Write! – the follow up to the popular Now Write! Fiction, which both do well and have a large following. Both students and instructors alike may find this easy-to-follow book handy to have for workshops and during the time in between. Some topics of interest that are covered: how to turn an experience into a personal essay, starting points for writing (words, evocative images, memories, photographs), and exercises to deepen or liven your story and make it meaningful. Chapter titles include: “Riffing” –which contains a list of words for riffing experiments: “What Was That Like?” “Your First Kitchen,” “Stepping into Photographs,” “The Author as Character,” etc. The over eighty chapters and exercises are split into sections with titles like “Get Writing,” “Characterization,” “Revision” “Truth in Nonfiction,” “Dialogue and Sound,” “Place,” and “Craft.”
***

Hildie S. Block, MA writing, Johns Hopkins. Writing instructor at American and George Washington Universities. She's the coeditor of Not What I Expected: the Unpredictable Road from Womanhood to Motherhood, published in 2007. She's published about 50 short stories in literary magazines like Gargoyle, Cortland Review, The First Line, San Francisco Review, LIterary Mama, Motherverse, The Imperfect Parent, and elsewhere. Her essays have appeared places like PopMatters, In the Fray, Organic Family, and elsewhere. Her blog for writers is http://hildieblog.livejournal.com/. Click here to see Hildie's workshops at The Writer's Center.
Posted by The Writer's Center at 12:00 AM