Today's post is by screenwriter and TWC workshop leader Lyn Vaus. His next workshop, Rewriting Your Screenplay: The Art of the Rewrite, begins June 16. Here he is. 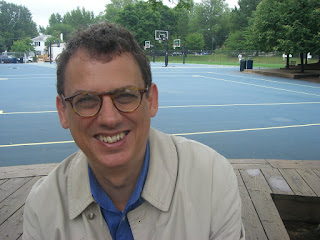 I’m the old-fashioned kind of screenwriter, a frustrated novelist.

Someone once said that if you want to write poetry you can drink wine, but if you wanted to write an epic, then you had to drink water from a wooden cup. I’ve always liked vino, so bringing my grasp within my reach, I decided a lyric voice was closer to my métier.

Writing in the first person is obviously what anyone does when writing dialogue and writing dialogue is my favorite part of screenwriting. I’d like to think I’m a good listener and spy. I’m fascinated by the things people say and, more important, why they say them. The music behind the words often betrays a secret. Any time a person opens his mouth, there’s drama if you really listen for it.

I invented a character and thought about him. One day I heard a voice, a funny old voice. Not mine exactly. I wrote down what the voice was saying. Without having written all those screenplays I probably wouldn’t have known to keep myself tuned so patiently to this one old voice, but I was hoping for dialogue. And this old voice, however improbably, was talking to God.

I’ll admit, I felt a little embarrassed at his stubborn will to exist, but sometimes it’s critical to let characters invade your privacy. Otherwise, they’re guests.

Oddly, I’ve never liked memoirs, even as fiction. But I forgot about that. I have a first draft now. It’s a bit like closing a window at night and hoping you won’t put your fist through it in the morning.

I don’t think my character would approve of my doing that. He lives in my spare room and has begun revising its contents. Being rather humble, he’s developed a distaste for the superfluous.

Lyn Vaus, a longtime screenwriter and industry professional, is best known for his award winning Miramax romantic comedy Next Stop Wonderland. He began his career as a story editor for a production company in Hollywood where he oversaw the script for New Line’s hit science fiction film The Lawnmower Man. He has had numerous screenplays of his own optioned, and in some cases produced by, among others, Imax, Fine Line, SenArt, and Miramax.
Posted by The Writer's Center at 2:49 PM