The Surprise in Writing by Angie Kim

I never wanted to be a writer.

Growing up, I didn’t keep a writing journal or create characters in my head. Writing was a means to an end: I wrote essays to get into college, then articles so I could list “Reporter” in my law school application, then law review pieces to include in my résumé, then briefs to persuade judges to give money to my clients.

Two years ago, I wrote my first “creative” personal essay. My goal this time: to write a how-to book for parents facing the same medical quandary with their kids that I’d gone through with mine. (The details of my son’s illness, I won’t go into here, but I’m happy to say that he’s fine now.) I’d read somewhere that it’s best to build a platform for a nonfiction book by publishing related articles. So I wrote an article summarizing my experience on what I called the “doctor-mom track.” Then I signed up for a personal essay class at The Writer’s Center, not because I wanted to improve my writing, but because I secretly thought the instructor would read my piece and immediately send it to his agent or his editor buddy at The New Yorker.

The instructor said my essay was a good effort. An interesting topic. He pointed out some nice language. Then he crinkled his forehead into a How-do-I-say-this-tactfully frown, and said, “This piece reads like an argument, like you’re making a case. I think of personal essays more as writers discovering something new, about what they think, who they are. Does that make sense?”

It didn’t. I had no idea what he was talking about. I wrote knowing exactly what I wanted to say. I wrote to convince others that I was right. That, to me, was the point of writing.

I kept quiet and listened to the instructor discussing the importance of things I’d never before considered: voice, showing rather than telling, description, dialogue, avoiding clichés. Publication, he said, we’d get to at the end. I considered skipping all but the last class.

For homework, he handed us a list of phrases and told us to write a short essay on one. I saw “knuckle bones” on the list and knew what I should write: an essay about my genetic deformity. I was born with missing knuckle bones in my pinkies and fourth toes, making those digits half the length they should be. Pinkies are supposed to be short, so my pinkies aren’t too noticeable, but my toe-stumps look freaky. I would argue show how my too-short pinkies, which never bothered me as a kid, ended up derailing my dream of becoming a concert pianist, whereas my toes, which I obsessed over as a child, ended up not affecting my life at all.

When I started writing, though, I realized that my toes had never bothered me in Seoul, where I grew up. I remembered obsessing over socks and never wearing toe-baring sandals as an immigrant teenager in America, but not in Korea. Why?

I didn’t know the answer. I wrote anyway, trying to figure it out. I wrote about my first day of school in America, when the Korean-American boy in my grade was assigned to be my translator, despite not speaking Korean. I wrote about my parents leaving me with relatives so they could work 18-hour days in a grocery store behind bulletproof glass. I wrote about the anxiety of not knowing how to ask for the bathroom. I wrote about my new classmates, the girls who fawned over me, like I was their pet. I wrote about my dad being shot in the store lobby. I did not write about my pinkies or my career plans.

The next class, I read a section out loud. The instructor grinned. “That,” he said, “is a personal essay.”

As for my mommy-track article, I took my instructor’s advice, completely revamped it, and got it published. A few literary agents contacted me to gauge my interest in writing a book on my “doctor-mom track” experience. I was thrilled, and I said so. But then came the biggest surprise: I found myself saying that actually, I’m discovering that I want to write something different. I don’t know what, exactly. I’ll know after I write it.

Angie Kim is a member and workshop participant at TWC. You can read Angie’s essay, “Missing Bones,” here. Her “doctor-mom track” essay is available here. 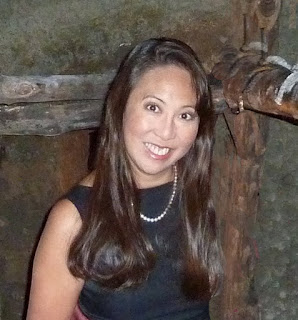 Angie Kim’s stories and essays have appeared or are forthcoming in New Letters, Gulf Stream, and Slate. Her work was awarded finalist for the 2011 Glimmer Train Very Short Fiction Award and the 2011 Tobias Wolff Short Story Award. She lives in Great Falls, Virginia, with her husband and their three boys.
Posted by The Writer's Center at 12:30 PM