When I look back at the poems I’ve written which the editors of Poet Lore have accepted, I see they have all been highly charged anecdotes, sometimes allegorical, fabulous or loosely meditative, which often seem to carry heavy moral implications. In the first poem Poet Lore published of mine, “Retribution,” the poem’s image of a twisted body reflects the emotional and moral effort it took the subject of the poem to ask for forgiveness:

It’s as though you’ve grown a third hand.
Out of your elbow, it shoots straight back
pointing to where you’ve been; you start
to go through life backwards, shaking hands,
making peace with everyone you’ve left behind,

Another poem “The Frog and the Snake” dealt with the suicide of my biological mother where the suicide incident was told in counterpoint to a vivid description of a garter snake hunting and finally consuming its prey. These and the most recent poem Poet Lore has chosen of mine were not emotionally easy poems, either to read or to write, and many other editors had shied away from them. But not the editors at Poet Lore and I thank them very much for their courage and for validating my efforts. I have come away from my experiences with all of the Poet Lore editors that they deeply believe in the poems they publish.

In the most recent of my poems, which Poet Lore has just published, “Constant Replay,” I have tried to write about the incident of the planes crashing into the World Trade Center from a slightly different and unexpected vantage point.

I began to write the poem in February of 2011 almost ten years after the attack on the World Trade Center. I am not a poet who can witness or experience something and then immediately go home and write about it. It takes me a long period of time to internalize something before I can write about it or even decide I want to. One may well ask how long does it take to internalize an experience, and I guess the answer is as long as one’s brain or heart and soul take, and that there may be an inverse relationship between the separate internal turmoil of the heart and soul and the weight of the external turmoil which is trying to enter the poet’s consciousness and take center stage asking him to respond.

There are so many conflicting and contradicting statements about what poetry should be and what it should do. To some extent my writing “Constant Replay” tries to address that. It probably doesn’t succeed in the sense that the poem does not go down any of the normal avenues where we expect a poem about such a public and tragic event should go. Over the years before writing the poem I’d read a number of poems about the collapse of the Towers, and some of them were so strong and glorious in the manner of how they approached and described the event, as well as what they said about it, that the idea of writing something (even if one wanted to) became daunting, and I didn’t want to. Part of why I didn’t want to was that I felt the subject would be well covered by better writers than I who had a sharper sense of the event’s importance and how to put that into the appropriate cultural context.

One such poem that I remember was Galway Kinnell’s “When the Towers Fell.” How could I ever match the description and the detail of such a poem? It was often majestic in its descriptive scope and then would zero in on a detail of an office worker or an investment banker doing whatever daily insignificant thing that particular person was doing at the moment when their world so momentously changed. Kinnell’s poem was both sweeping and fragmented, and in its fragmentation, the poem reflected the fragmentation that such an experience has upon one’s consciousness. That is to say Kinnell’s poem seemed to, among other things, express how we, as witnesses or readers, cannot really take in the event as a whole unified experience. There is no one image which says it all. It is too immense for us to emotionally and individually take it all in. Each individual who died carried to his or her death a whole story with its own separate sadness and tragedy, and each deserves his or her own elegy. But something like that cannot be written. Not all in one poem. Then there are just the implications of the attack beyond the personal, its symbolism, if you wish, to both us and to the attackers, but no matter how we look at the event the size of it will only allow us to come up with a one-sided or a lopsided story. “Constant Replay” is my own lopsided take on that event which others must feel on one level or another but have not expressed.

When I began the poem, I knew from the first line I put down that it was going to be a poem about the Towers, but I had no idea how it would turn out. The ambivalence of the speaker in the poem becomes to a great extent what the poem is about. It’s so easy to take sides at the time of such an obviously powerful event especially in the moment when all emotions are running amok. Oddly everything seems so clear as to whom has been offended, who is right and who is wrong, but what can one glean and how does one finally feel after the knee-jerk of passion has subsided?

I think I have always written poems that are personal, and by that I do not necessarily mean that they are about me, but instead that the poem speaks out on an individual basis to an individual whom I don’t know. When I imagine someone reading one of my poems, and perhaps this one more than a lot of the others, I see a person with my book or a copy of the journal my poem is in open in front of him or her. It is always evening, actually well into night, and that person who I am trying to touch is doing this at a moment just before they finally turn out the light and go to sleep, and if there is a nightly habit or ritual to this, it is something akin to saying a prayer before you go to bed.

Tim Mayo is the author of "Constant Replay" (p.28) published in Poet Lore (Volume 106 3/4 Fall/Winter). You can purchase the issue here or procure a subscription to Poet Lore here. 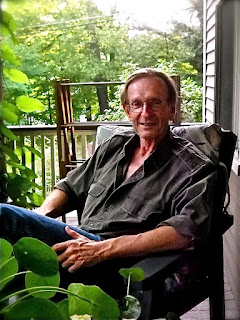 Tim Mayo’s poems and reviews have appeared in, 5 AM, Poetry International, Poet Lore, River Styx, Web Del Sol Review, Verse Daily, and The Writer’s Almanac, among many other places. His first full length collection The Kingdom of Possibilities was published by Mayapple Press in 2009. He has been twice nominated for the Best of the Net Anthology, twice for a Pushcart Prize and was chosen as a top finalist for the Paumanok Award. He is on the author committee of the Brattleboro Literary Festival.

Photo credit to Amelia X
Posted by The Writer's Center at 1:00 PM