The most obvious influence and closest relative to my poem “Shank” is Phillip Levine’s “Animals Are Passing From Our Lives,” which is written from the perspective of a pig:
…………I can smell
the sour, grooved block, I can smell
the blade that opens the hole
and the pudgy white fingers
that shake out the intestines
like a hankie
and ends with the great final stand: “No. Not this pig.” This poem has many striking similarities with “Shank,” so you can imagine my surprise months after I finished revising “Shank” when I read Levine’s poem for the first time.
That might not be entirely true. I’m sure I read Levine’s well-anthologized poem years earlier during my undergraduate years, but I was not consciously thinking of Levine at the time I wrote “Shank.” The mind does this sometimes. It synthesizes, rearranges, spits an idea back out years later, and congratulates itself on its originality.
Looking back through my first drafts, the synthesis of Levine’s poem is less evident. I find the first line I wrote for the poem in a journal dated during the summer of 2010: “I am the cow who’s too stupid to know,” which is a line that was cut pretty early in the drafting process. At the time, I had been planning my food-themed freshman comp class, and I was reading a lot of articles and books about industrial farming and livestock conditions. In younger versions of the poem, the comparison between the cow and the speaker was a more self-conscious one, a more blatant metaphor, and the voice didn’t come from the animal itself.
The poem was titled “Shank” right from the start. This doesn’t happen to me often, as I usually don’t understand my own poems well enough in the beginning to give them their final titles, but in this case, the duality of the word’s formal definition (a cut of meat from the lower limb) and its street definition (to be cut by a makeshift blade) was a tension that initially set me writing this poem.
At the time, I was writing a lot of poems which examined the relationship between a queer identity and violence, and how coming out publicly opens oneself up to freedom but also a vulnerability (physical and otherwise).  As I revised the poem over the next few months, I became more attracted to this cow in the slaughtering assembly as a character, and as a result, its role in the poem grew larger until it became the focal voice.
The queer and human voice still exists, but it’s been filtered through the cow and only comes out forthright once toward the end: “In the night I held hands / with a man, I licked his face. / Then I was fat enough, full even, / placed in line.” When friend and terrific poet Josh Kaslcheur pointed out the similarities between “Shank” and “Animals Are Passing From Our Lives,” I was drawn to the way these two poems were in conversation with each other and how the idea of an animal walking toward its butchering block can encompass such different metaphors.
Jacques J. Rancourt is the author of "Shank" (p.42) published in Poet Lore (Volume 106 3/4 Fall/Winter). You can purchase the issue here or procure a subscription to Poet Lore here. 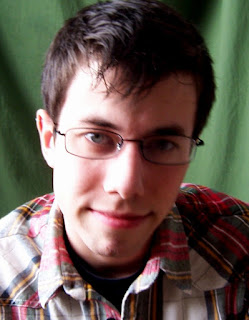 Jacques J. Rancourt holds the 2011-2012 Halls Emerging Artist Fellowship from the Wisconsin Institute for Creative Writing. His poems have appeared or will appear in New England Review, Beloit Poetry Journal, Colorado Review, and Columbia, among others. He lives in Madison, Wisconsin, where he was a founding editor of the online literary journal Devil's Lake (www.devils-lake.org). He blogs at http://americanshrapnel.blogspot.com/.