We’ve been very fortunate to receive grants from the National Endowment for the Arts over the last few years to offer support for writing workshops for veterans, active duty service members, and their family members. Through these workshops we’ve come to know and appreciate the good work of the Veterans Writing Project. In addition to writing workshops, VWP produces a literary journal, O-Dark-Thirty, which has just published its second issue. We’d like to thank Dario DiBattista for this blog posting to First Person Plural. 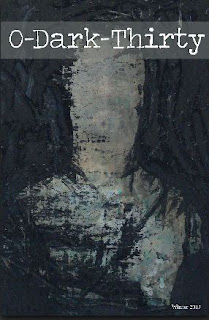 ‘For Us to Bear the Report’: The Writer’s Center and O-Dark Thirty, a Military Veteran-Run Literary Journal


The Veterans Writing Project, for which I’m an instructor, provides free writing workshops to veterans, service members, and their families at places like the George Washington University, and also provides instructors through the National Endowment for the Arts for writing workshops at Walter Reed National Military Medical Center at Bethesda because we believe that every veteran has a story tell, those stories are important, and they can serve to heal. The Writer’s Center supports us in partnership through teaching and through helping sharing veterans’ stories with our online and print literary journal O-Dark Thirty.

Our newest issue, our second issue, had an ominously recurring theme: our “ghost issue.” And the artwork on the cover, a piece called “Cody” by Army veteran Joe Olney, sets the tone appropriately.

A wonderfully reflective essay by John Purdue (letters of his to our editor) continues the theme in the nonfiction section. Purdue served stateside during Vietnam, sometimes dealing with burn victims, more often dealing with the mental tragedies of war in a special unit for some of the broken men who returned from combat. His goal was to help provide them a better facility than the one in “One Flew Over the Cuckoo’s Nest” and help them “not blow the back of their heads off.” None died under his care. But two were successful at suicide while on leave. The emotion and struggle of Purdue of coping with those experiences, among others, perhaps lead him to hold a gun later in the narrative, considering his own suicide.

Next, the theme is also explored in the fiction section in Rod Merkley’s “Walk Until You Sleep.” The former Army medic author envisions a protagonist who has struggled too long with his demons from war and decides that killing himself is the only solution. But he doesn’t want to make it seem like suicide, because he thinks that truth will damage his memory to his son who will survive him. He considers a planned motorcycle wreck or “death by police” but ultimately just plans to go on a long walk, which takes an unexpected turn.

There are other excellently crafted works loosely related to the theme (and don’t forget to check out our profile of William Zinsser, who is a veteran of WWII).

We thank the Writer’s Center for their support of what we’re doing, and hope you’ll check out 0-Dark Thirty and consider subscribing.

Posted by The Writer's Center at 1:39 PM