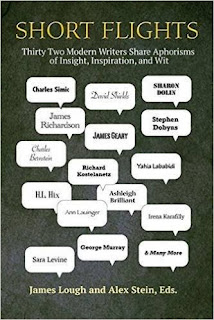 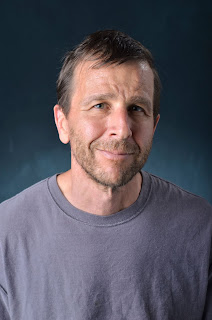 Ahporism: a pithy observation that contains a general truth, such as, “if it ain't broke, don't fix it.”


Short Flights: 32 Modern Writers Share Aphorisms of Insight, Inspiration and Wit is the first anthology of modern writers of aphorism. The seed of Short Flights was planted in the 1970s when, growing up in Seattle, I would read Ashleigh Brilliant’s syndicated Pot-Shots in the comics section of The Seattle Times. Alongside The Peanuts, Beetle Bailey, and Hagar the Horrible, Brilliant’s illustrated epigrams (as short, witty aphorisms are sometimes called) stood out:  “My life has a superb cast but I can’t figure out the plot,” I would read, or: “My opinions may have changed but not the fact that I am right.”

When, a few short decades later, I determined to create this anthology with co-editor James Lough, Ashleigh Brilliant was one of the first writers I contacted. Would he be interested in contributing?


Ashleigh Brilliant is my real name. But, although I am in fact a Life Member of MENSA, there is only one truly brilliant achievement to which I lay claim. I always wanted to be a writer, but early in life I became aware that the field was overcrowded. “To be sure of winning” (as one of my lines says) “invent your own game, and never tell any other player the rules.” So I invented my own writing game. I did however take the risk of proclaiming the rules—as I am about to do once again on this page. But, after a career of more than 40 years, I still seem to be the only person playing this particular game. Here, then, are the most important rules for composing the epigrams which I call Pot-Shots or Brilliant Thoughts.

The length limit is 17 words. That is a maximum. There is no minimum.

·    They must be easy to translate into other languages and easily understood in other times and places—hence no rhyme, rhythm, idioms, puns, or other kinds of word-play, also, no topical or cultural references.

Brilliant has ultimately produced more than 10,000 of these Pot-Shots, which have been published as books and in newspapers, as well as post-cards, tee-shirts, and coffee mugs. He is one of the most quoted living writers (“Appreciate me now, and avoid the rush.”) and one of the highest paid—per word.

Other contributors to Short Flights include Charles Simic, James Richardson, Sharon Dolin, Stephen Dobyns, and Holly Woodward.
"Editors Lough and Stein prove that good things come in small packages with this collection of modern aphorisms—short but sweet nuggets of wisdom, humor, insight, and clever turn of phrase . . . something for everyone in this proverbial box of chocolates." —Publishers Weekly

Alex Stein teaches at the University of Colorado–Boulder. He is the author of two books of interviews, The Artist as Mystic: Conversations with Yahia Lababidi and Made-Up Interview with Imaginary Artists, as well as a book of aphorisms, Weird Emptiness.
James Lough is a professor and graduate coordinator at the Savannah College of Art and Design. He is the author of This Ain’t No Holiday Inn: Down and Out at the Chelsea Hotel, 1980–1995. He has published more than 70 articles, short stories, and book reviews, and has served as an editor with several literary journals, including Bastard Review, Denver Quarterly, and Divide. His collection of essays, Sites of Insight won the Publications Prize from the Colorado Endowment of the Humanities, and his stories have won the 2011 America’s Got Stories Award and the Frank Waters Southwestern Writing Award for short fiction.
To purchase Short Flights, visit http://www.amazon.com/Short-Flights-Thirty-Two-Aphorisms-Inspiration/dp/1936182882

Posted by The Writer's Center at 2:00 PM

I always wondered whether Lough ever noticed me loitering in the lobby of the Chelsea Hotel when he was a resident there, in the fall of 89? I was semi-short (or of average height), celtic-looking or almost fey, dark hared, dark eyed, with a sharp look - almost frightening - & often looks a bit dull, glasses, SLR in tow, along with a friend of mine, Indian, tubby, average hight, longish hair - looks a bit like a trendy hippy - bum bag, sneakers (laces untied)? Of course, it was only for a few minutes to check the place out, but, you know, Lough might have been hanging around the lobby too, looking for some action & perusing the passing crowd.