A Lesson from Aloes: An Interview with Director Laura Giannarelli 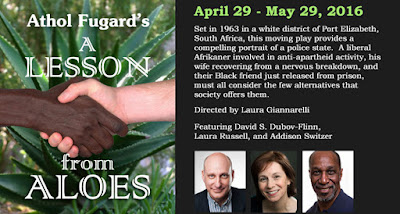 This spring, The Quotidian Theatre Company will present Athol Fugard’s play, A Lesson from Aloes, a story about three characters in 1963 South Africa: Piet, a liberal Afrikaner, his wife Gladys, who is of English descent and recovering from a nervous breakdown, and Piet’s friend Steve, a black man just released from prison for protesting apartheid. While set in a particular moment of South African history, the three characters’ interactions as they struggle with betrayal, love, and friendship speaks to the universal appeal of Fugard’s work more than 30 years after he wrote it. We had the opportunity to chat with the director, Laura Giannarelli, about the production.

TWC: You have a great deal of experience as an actor, narrator, and director with a lot of that work in the Washington D.C. area. You’ve performed at the Kennedy Center, Roundhouse Theatre, and co-founded The Washington Stage Guild. What are you looking forward to in your upcoming directorial role for A Lesson from Aloes? Why did you choose to direct this play? 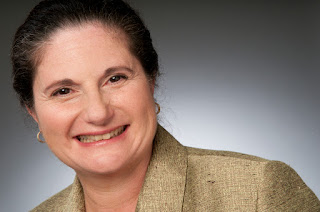 LG: I’m very much looking forward to directing it because I love Fugard’s work and this play in particular. It’s set during the horrors of apartheid, but deep down it’s about friendship, love, and the question of how to regain these things once they are lost.

Jack Sbarbori [Quotidian founder] brought the play to me.  I went back to my bookshelf and reread it. I wondered if it would hold up to time or if it’s about a problem we solved with the end of apartheid. But I think it holds up really well. In the play, the characters are living in 1963 South Africa; Steve was arrested, Piet and Gladys’s house was raided due to their anti-government activism. But I think the play is relevant because it could actually take place anywhere in any country that has faced oppression. [Anyone] can relate to their plight—when you can’t get past a friend’s betrayal or a friend believes you have betrayed them. Fugard has a way of putting us in the shoes of those characters in the way he honestly portrays human interaction.

TWC: What kind of questions do you want the audience to have after seeing A Lesson from Aloes?

TWC: What relevance do you think this play has for present times? Do you think it is a hallmark of good theater to be able to take this one specific moment, narrow it down to a few characters, but still have vast universal appeal?

LG: I feel very strongly that it does. That’s why Fugard’s plays are so powerful. They let you be right there in the circumstances with the actor in the play. I think for a theatrical experience to be universal, there has to be a way in for us. We have to be able to care about, to be invested in, at least one of the characters. There has to be someone we’re rooting for. In this play, we root for everybody and feel all their pain. But I think that is a hallmark of great theater… [plays] written in a specific time and place under specific circumstances, but centuries later we can relate. Think of Shakespeare, Wilde, and all the other great playwrights.

TWC: What do you consider important or special about Fugard’s plays?

LG: They’re always heartfelt and have a strong sense of joy and emotion. It’s sort of exhilarating when a character’s bravery and endurance is so moving to me. I wouldn’t want to give away the end, but to me it’s deeply moving in the character’s way of saying, almost like Samuel Beckett, “How can I possibly go on, but I’ll go on.” There’s nothing to do but persevere and keep at it and to me that’s emblematic of the human condition; we struggle against obstacles but we don’t give up.

LG: I worked with actress Laura Russell, who plays Gladys, when I directed Faith Healertwo years ago. I haven’t worked with David Dubov or Addison Switzer before, but we all have mutual friends in the company. Addison is sort of the newest person to me in terms of knowing his body of work, but he gave a fabulous audition. He knows David and other members of the company and he’s already part of the large circle that Quotidian draws on...I’m very excited. I love this play.

The Quotidian Theatre Company has specialized in plays that focus on the understated storytelling rather than elaborate staging since 1998. All plays are performed at The Writer’s Center’s Allan B. Lefcowitz Theatre. The 2015–16 season line-up can be found here.

A Lesson from Aloes runs from April 29 to May 29 at The Writer’s Center, located at 4508 Walsh Street, Bethesda, MD 20815.Directions and parking information. Tickets can be purchased here. TWC members only pay $15!