A collection of life essays by Cija Jefferson 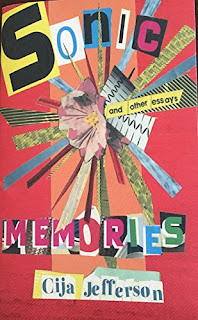 Cija Jefferson, Baltimore resident and author, recently self-published her first book, Sonic Memories/and Other Essays. The inspiration for Cija’s collection of personal essays came from an assignment at the University of Baltimore's Creative Writing & Publishing Arts MFA program in which graduates were required to design and write a book. Although the collection began as a class project, Cija says that “the process of pulling essays and putting them together was very organic.” On the main floor of The Creative Arts Alliance for Cija’s book launch party, where I met Cija, chairs are set up facing a screen that has a slideshow of pictures from her life—her as a baby, she and her sister wearing matching dresses, her with a group of friends from college. It’s a surreal experience to see the characters from Cija’s essays suddenly come to life.

Cija initially planned to focus this collection on her post-college years when she lived in California. Her original working title for the book was, “Which Way Home.” However, guided by her mentors in the MFA program, Cija decided not settle on a fixed theme. Instead, she let her writing take her along for the ride. The result was a coming-of-age story told through a wide range of essays that span from her early years as a trouble-loving child, to her young-adult years when she struggled to find her place in the world, and ultimately, to the place she is today— where she says she’s beginning to let go of the negative voices in her head and pursue her true purpose in life: writing.

It’s hard to reconcile the outgoing, infectious, and confident Cija, who is standing across the room from me, with the timid girl in her essay, “The Whisper from Within.” In this piece she admits to purposefully waiting to tell her friends and family about a reading she was performing until the last minute—hoping, successfully, that if she told everyone at the last minute, no one would be able to show up. Although the reading in this essay occurred long before she completed Sonic Memories/and Other Essays, Cija admits that the nerves she felt that day are still very much present: “I still get butterflies when I step to the mic and share any of my work,” she says. “I've definitely gotten better about not allowing my nerves to take over, which is easier said than done—depending on the subject matter. Stories like ‘The Whisper From Within’ are tough to read aloud because the content strips away any artifice and reveals my fears and insecurities; it makes me feel exposed.”

As she reads excerpts of her essays at the book launch, Cija’s voice is loud and projects confidently. Wearing a chic white dress with her hair pulled back—an open and friendly smile on her face—Cija begins the reading by talking a little bit about the process of writing her book. Like many writers, the idea of publishing a full book initially seemed like a far-off, far-fetched dream. “I always thought of writing a book as some sort of lofty goal not made for mere mortals,” she says. “Honestly I don’t know that I would have ever attempted to self-publish a book, had it not been a program requirement.”

At 105 pages, Cija’s book is an emotional roller coaster. Separating humorous anecdotes from gut-wrenching pain by little more than a page or two, Cija’s book is a raw exploration of growing up, and on how the choices we make in an instant—looking back at a hospital bed or stealing a piece of candy from a local store, for example, have lasting impacts on us even years after the they are made.

Posted by The Writer's Center at 8:38 PM