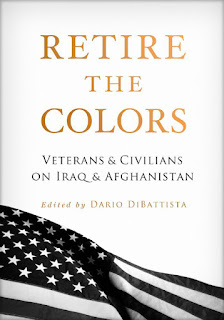 In honor of Veterans Day, Assistant Director Sunil Freeman asks Dario DiBattista about his newly published anthology, Retire the Colors: Veterans & Civilians on Iraq & Afghanistan, a collection of nonfiction accounts about service members returning to civilian life. DiBattista and authors will read from and discuss the anthology 3:00 p.m., Saturday, November 12 at The Writer's Center.

SF: First of all, congratulations on publication of this anthology. This includes a wide range of voices about the return to civilian life. It must have been an enormous effort. I’m interested in how this anthology came to exist. Did you propose it to a publisher?

DD: Sue Petrie, publisher of Hudson Whitman / Excelsior College Press, did actually come to me with interest about putting together a book. This was my idea—something unique and timely as the wars in Iraq and Afghanistan were "winding down," though obviously we're still involved in combat in both locations.

SF: About how many submissions did you receive, and were there any particular surprises?

DD: We'd probably gotten about 75–90 in total, though, most of the pieces and writers I'd assigned or personally made come into fruition through my networks. Joseph R. Bawden's "It's Nothing (Singed)," whose piece I was able to select through the open call for submissions through Excelsior College, has stuck at as particularly unique in perspective and really been resonating with general audiences so far. We think about combat stress and PTSD in "a ticking time-bomb" sort of cliché, but for him, he's numb to life in many ways after his time overseas.

SF: I’m struck by how many different perspectives you were able to include. Veterans who served in the Army, Marines, Navy, and Air Force are all represented, and we see essays by veterans of both Iraq and Afghanistan. How much shaping of the selections did you do to create the overall collection?

DD: A diversity of perspectives was key to this collection. I work really closely with storytellers. Note the word "storytellers." Many of the writers in the collection don't have M.F.A.s or much formal instruction in writing, so I was able to cast a larger net. In a way, I was less concerned with the quality of craft tricks a writer could use for essays in this collection, than helping someone tell a true, honest, impactful story. We collaborate together in shaping their stories, though, of course, many of these essays were completed by very skilled and successful veteran writers who didn't need much editorial direction from me.

SF: The inclusion of an essay by the Iraqi Cultural Attaché added another dimension to the anthology. How did this come about?

DD: I reached out to both the Iraq and Afghanistan embassies. And even though both were interested, they weren't able to connect me with writer-representatives of their countries. So I asked Dr. Tahani Al-Sandook if she had a piece she'd want to write. And she said yes, obviously. My mentor Mary Collins taught that you will never know what will happen if you don't ask. I was so thankful to have some international perspective, as one of the biggest criticisms of art and storytelling related to these wars is that it's very American-centric.

SF: A very small percentage of our overall population has served in the military over these last 15 years, and a large majority of Americans have no real understanding of the military. Essays by civilians who have not served are also included in the collection, creating a sort of bridge over that big divide. Would you like to comment on that?

DD: America has an empathy problem, which I think of as a personality disorder. Many of us can't, won't or don't consider the experiences of people who are different than ourselves. Just go to any social media thread or comments section of a controversial story for an example of this. I think this is because we don't read -- reading others’ stories forces us to intellectualize different experiences in a uniquely personal way. It's kind of an ultimate act of communication when you can get someone to sit down and listen to your story, even if it's just a 15-minute personal essay. Hopefully, through this collection, readers will understand the impact of war as being bigger than just the experiences of military men and women.

SF: Much of the writing that has come out of the wars after 9/11 has focused on the actual wartime experience. What were some of your thoughts as you put together this anthology, focusing more on the return to civilian life?

DD: There are plenty of well-made being "over there" stories, and almost nothing about coming home, which for many of us is an even more challenging coda to our experience. I intentionally made it clear that I was only concerned with stories about "being back home."

SF: Could you suggest some authors you’d recommend to anybody who wants to learn more about the experiences of service members who have served in Iraq or Afghanistan?

DD: Colin Halloran's memoir-in-verse, Shortly Thereafter, is a tremendously accessible-yet-literary insight onto what combat can do to the soul. Kelly Kennedy takes you over there in a uniquely authoritative way with They Fought for Each Other. Also, oddly, I think Jen Percy's supernatural Demon Camp, about a young man who gets convinced that his PTSD is demonic possession, is maybe the best book I've ever read about Iraq or Afghanistan.

SF: Finally, I know you’re involved with many editorial projects, including The Veterans Writing Project journal O-Dark-Thirty, JMWW, .Mic, and 20 Something Magazine.  Are there any projects on the horizon you’d like to mention?

DD: I've got a screenplay about a Marine coming home from war and his spiritual and physical journey in the form of an epic road-trip with his childhood best friend. Come at me, Hollywood.

Dario DiBattista is the editor of the anthology Retire the Colors: Veterans & Civilians on Iraq & Afghanistan. His work has appeared in the Washingtonian, the New York Times, the Washington Post, Connecticut Review, [Pank], Mic.com, and many other publications. Additionally, he's been profiled in the New York Times and has been a commentator on NPR and for the BBC. He served in the United States Marine Corps Reserve from 2001 to 2007, later becoming a distinguished graduate of the Johns Hopkins University M.A. in Writing Program.

Posted by The Writer's Center at 1:32 PM

I am truly inspired by this online journal! Extremely clear clarification of issues is given and it is open to every living soul. I have perused your post, truly you have given this extraordinary informative data about it. Military collectibles