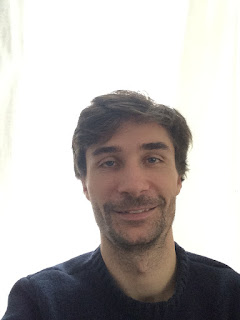 CASEY NAGLE is a graduate of the MFA Program at Syracuse University. This is his first publication.

We painted all the windows white,
drilled a hole in the back windshield
and entered our abandoned Lumina.

Reclining in the front seats,
we loved its theater-dark interior.
We loved the upside-down projections:
the sunset, the panic, the neighborhood search.

We even watched our parents give the cops our names.
Forever we sat behind the wheel, waving goodbye,


happily, as if we were moving.


ET: Can you describe your process for composing this poem?

CN: I’ve written this poem hundreds of times and have filled lots of legal pads with both varying and totally identical versions to get it to where it is now. Typically, I read what I write aloud to myself till it sounds right. Initially I wrote the poem to appear like somebody with privileged access, like somebody with a backstage pass to their own illusions, some kind of authority on a benighted suburban street. Now I hope it describes a moment someone can relate to, a childhood moment, or moment when you feel like a child and you have created something beautiful, and you realize, but don’t really care, that you have made someone else terrified in your absence. I’m grateful, too, for the input of generous advisors and friends who have read and suggested edits for this poem over the years.


ET: This poem is written in the lyric tradition, would you agree? How do you see it fitting into that larger tradition?

CN: Yes, I think it is a lyric poem. The lyric tradition relies on the music of language to generate the emotional experience of the poem. Many of my poems contain narrative or argument, but I can never be satisfied with any poem until sounds just right. This poem’s central metaphor is highly involved and complicated and would be emotionally inaccessible without lyricism.

ET: Who are your influences?

CN: John Keats, Tomas Transtromer and all the people in my life who are committed to what they do.

ET: Did you and your sister often cause neighborhood panic? J

CN: I have five siblings- two older brothers and three younger sisters. Over the years we have caused all varieties of neighborhood and internal panic.

ET: Can you discuss the editorial process that you went through with Jody Bolz, Poet Lore’s executive editor?

CN: It has been amazing and humbling, truly one of the most affirming things to happen to me as a writer. I was attracted to Poet Lore largely because of Jody Bolz’s reputation as a uniquely engaged editor who reads every single submission. So I submitted and only a few weeks later received an acceptance letter with her signature on it. I was thrilled. Then not long afterwards, she nominated me for a Pushcart Prize and invited me to read at AWP and now I am given this chance to talk about my work. It has been a real honor working with Jody Bolz and everyone else at Poet Lore.
Posted by The Writer's Center at 2:15 PM