It's a question we've asked over and over: Walt Whitman subscribed. Do you?

But today, on Whitman's 199th birthday, we remember that he not only subscribed to Poet Lore but engaged with us, too.

In 1892, Whitman purchased ads for "Leaves of Grass" in three consecutive issues. When he passed later that year, our editors included a memorial message for the poet in the Notes and Notices section, highlighting his prior impact and predicting his lasting influence. "Inclusiveness was his point," an excerpt of the message reads. "For illimitable hope and love he stood and for that his style stood also; although it was strange, it was fit, and had a music all its own."

Many years later, in our 107th volume, Poet Lore would feature a page from Whitman's notebook on the cover of our spring issue. In the accompanying Editor's Page, our editors would echo their forebearers sentiment, saying, "The [image of the notebook page] radiates conviction and expansiveness. Who can fail to recognize Whitman in that?"

Today in particular, though hopefully always, we remember Whitman by finding and crossing the blurred lines between expansion and inclusion. We try to cross those lines—extending ourselves only by fiercely embracing the world around us. Perhaps we try to recognize those elements of Whitman our Poet Lore editors have cherished for so many years—hope, love, evolution, style—not only in his own work but in that of our peers and ourselves.

And if we find it hard to do so (or if we'd prefer a music all our own), there's still hope. It's simple enough to follow in Whitman's prodigious footsteps...just subscribe to Poet Lore!

The full text of the 1892 note on Whitman's death can be read below: 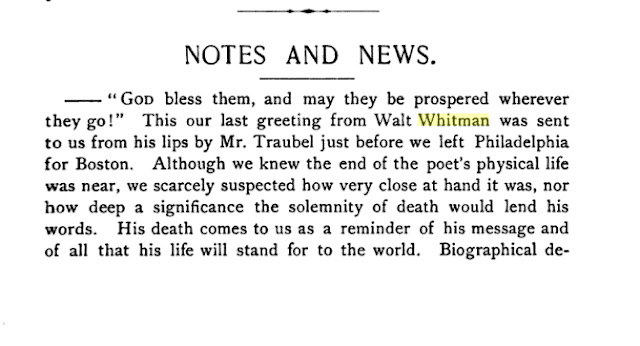 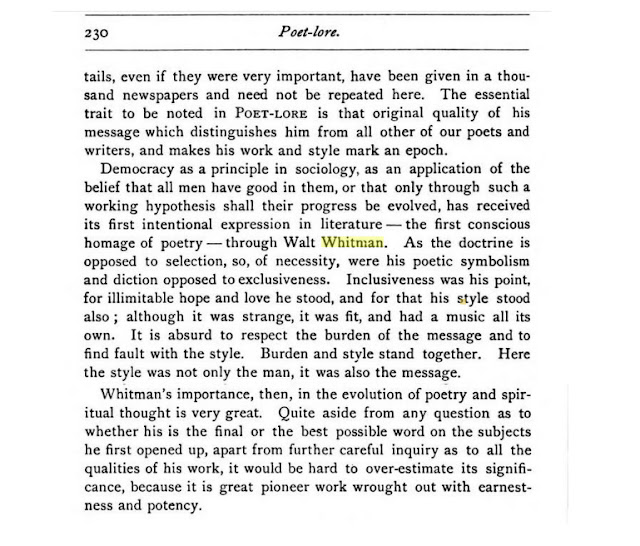