Monday Review: E.F Benson's "The Room in the Tower" 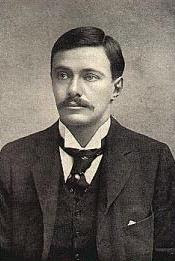 Edward Frederick Benson (1867-1940) was a prolific English author of more than 100 books (including 70 works of fiction). Largely forgotten today in the United States, he is perhaps best known in the UK for his Mapp and Lucia novels about life in the fictional city of Tilling. Originally published in the 1930s, these books were later resurrected and formed the basis of popular 1980s film adaptations on the BBC. During the course of his career, Benson—the son of the Archbishop of Canterbury—nurtured an interest in the supernatural; he published more than fifty “spook” stories, many of which are considered classics in the genre.

Among Benson’s classic ghost stories is “The Room in the Tower.” Published in 1912, this frame tale involves an unnamed narrator who is haunted by a recurring dream that ultimately proves all too terribly true. In it, the narrator finds himself “set down at the door of a big red-brick house” and then sits to tea with the gloomy family of a schoolmate named Jack Stone. Each time the dream recurs, it ends with the mother, Julia Stone, announcing to him: “Jack will show you your room: I have given you the room in the tower.”

That room in the tower, it’s easy to surmise, is where you don’t want to be lodged for the night. It’s a predictable outcome; long before we reach the end we know the dream will one day be played out in the narrator’s life. But this is not the kind of ghost story you can measure the creep value of by the shocks of its plot twists. Instead it’s in the slow, deliberate way in which the author delays your inevitable trip into the room in the tower—and in the ghoulish thing you find lurking there.

-reviewed by Kyle Semmel
Posted by The Writer's Center at 7:00 PM

Labels: "The Room in the Tower", E.F. Benson, Monday Review