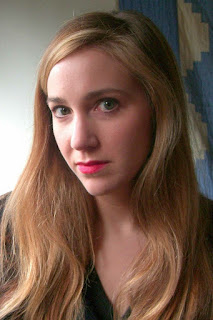 At our Sunday, March 7 Open Door Reading at The Writer's Center, Dora Malech--a Bethesda native and former workshop participant--will join one of our current workshop leaders, Nancy Noami Carlson, for what will be a great, great poetry reading. Here's an interview I recently conducted with Dora. But first, here's Dora's bio:

Dora Malech was born in New Haven, Connecticut in 1981 and grew up in Bethesda, Maryland. She earned a BA in Fine Arts from Yale College in 2003 and an MFA in Poetry from the University of Iowa Writers’ Workshop in 2005. She has been the recipient of a Frederick M. Clapp Poetry Writing Fellowship from Yale, a Truman Capote Fellowship and a Teaching-Writing Fellowship from the Writers’ Workshop, a Glenn Schaeffer Poetry Award, and a Writer’s Fellowship at the Civitella Ranieri Center in Umbertide, Italy. The Waywiser Press published her first full-length collection of poems, Shore Ordered Ocean, in 2009. The Cleveland State University Poetry Center will publish her second collection, Say So, in late 2010. Her poems have appeared in numerous publications, including The New Yorker, Poetry, Best New Poets, American Letters & Commentary, Poetry London, and The Yale Review. She has taught writing at the University of Iowa; Victoria University’s International Institute of Modern Letters in Wellington, New Zealand; Kirkwood Community College in Cedar Rapids, Iowa; and Augustana College in Rock Island, Illinois. In Fall 2010, she will serve as Distinguished Writer-in-Residence in Poetry for the MFA Creative Writing Program at Saint Mary’s College of California. Her paintings and drawings are represented by The Chait Galleries in Iowa City, Iowa, where she lives. Find her online at doramalech.com.

Kyle Semmel: Before I ask about Shore Ordered Ocean, I want to know when you took your workshop(s) at The Writer's Center? Who was your workshop leader(s)?

Dora Malech: I must have “discovered” The Writer’s Center in the mid-nineties, in late junior high school or early high school. My family went to the Chinese restaurant (it used to be called Peking Hunan, but it’s Moongate now) at the other end of the big parking lot from TWC, and when I saw The Writer’s Center, it felt like destiny. Keep in mind that I was fourteen or fifteen years old, and thus prone to interior drama and believing in destiny whenever possible. That said, it truly was exciting to open the doors and discover a place where people were making a life out of what I loved to do, which was write.

I remember the coffee-and-photocopier smell; I remember flipping through the literary magazines and reading contemporary poetry for the first time, really. I bought a copy of Hayden’s Ferry Review and pored over it and eventually ripped out a poem by Jon Pineda that I held onto for years.

I ended up taking a Summer workshop with Rose Solari, and then a Fall workshop with Rose Solari, and so on. In short, I fell in love. Rose was a passionate, sensitive, intelligent, no-nonsense workshop leader. I remember her as being reverent when it came to poetry and irreverent when it came to everything else. I bought her collection of poems, Difficult Weather, and carried it with me everywhere. I underlined and dog-eared and asterixed it up. She was like the high priestess of poetry to me as a teenager: I worshiped the way she carried herself in the world and the way she carried herself on the page. In her presence, poetry was no longer a lofty abstraction; it was a life.

KS: How did your experience at TWC help prepare you for future writing workshops--at the Iowa Writers' Workshop, for example?

DM: Being in writing workshops at TWC, as opposed to English classes at school, taught me to read as a poet, to tune into language and form and image and so forth, as opposed to trying to hack past the language to critique the so-called content. I learned to share my reactions without being proscriptive; I learned that asking good questions is usually more helpful than trying to sound smart; I learned to take criticism and I learned the importance of rigorous revision. I also learned, however, that different writers have different visions of what a poem should “do”, of what a poem “is”, and that we should value that diversity instead of trying to homogenize. Internalizing those lessons at TWC enabled me to be a more constructive workshop participant and, eventually, a more constructive workshop leader.

KS: You've had a lot of success in your career. What would your advice be to young poets who aim to make a life out of writing, reading, and teaching poetry?

Oh, boy. My first impulse when I see the words “success” and “career” is to start self-denigrating, to list the publications that have rejected me, to admit to the great literature that I still haven’t thoroughly read and absorbed, to rail against the adjunct system in American colleges that leaves so many of us underemployed, or benefit-less, or unsure if we’ll have a job from year to year or term to term. That, however, is just my first impulse. Then I take a deep breath, and try to take my own advice, which is the following: don’t blame poetry for the shortcomings of people/things/society. Keep poetry sacred.

Don’t let a rejection slip, or an egomaniacal workshop leader (not at TWC, of course, but they’re out there!), or a snarky blog, or a careerist prize-winner, or a rude editor get between you and the page. The only thing between you and the page is a pen or a pencil. I hope this makes sense; I guess I’m trying to say that if “po-biz” or academia or interpersonal tzurrus or apathy or small-mindedness get you down, which they will, don’t let that poison your relationship with poetry. Easier said than done, I know. But we have to try.

My other piece of advice for young poets is much simpler: read like crazy. Read it all. There are conversations happening on the page that defy time and space; when you read, you enable yourself to enter those conversations. Your world becomes richer and more complicated, and your writing follows.

KS: The poems "Makeup" and "S.O.S."--which, along with many other poems in this collection, explore death--are immediately followed up by a wonderful "birth" poem called "Delivery Rhyme." Can you talk about the writing and the structure of Shore Ordered Ocean? How did you go about putting these poems together? 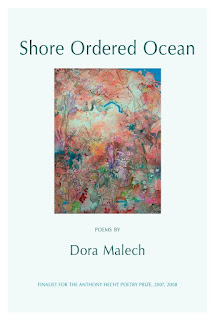 The book came together much like my poems come together: I don’t force a “theme” or “subject” when I’m generating a poem; I’m more like a hunter-gatherer than a farmer who can cultivate a particular crop. I do, however, eventually step back and look for patterns and threads, rearranging for juxtapositions and maximizing discourse between images and moments of language. With Shore Ordered Ocean, I had a big muddle of individual poems and I tried to let them talk to each other, literally spreading them out on the floor, shuffling and reshuffling. They talked to each other about love and death and family and relationships and war and distance… all kinds of distance. I wrote the poems during a time when I was trying to navigate different kinds of distance: the frustration of being a citizen of a country at war when the media mediates all of the horrors of that war for me; the more straight-forward physical remove of a long-distance relationship. I tried to weave these, and other, distances together to create not a narrative exactly, but perhaps a trajectory or momentum through the collection. I think about that Dylan Thomas line, “the force that through the green fuse drives the flower”; I hope that that “force” is present in the collection, even if I can’t exactly explain it. I hope there’s at least some resonance, or friction, when birth and death or love and war rub elbows from poem to poem, and within poems as well.

KS: I'm curious about "The Numbers Game." How did you come to write a poem consisting solely of surnames of U.S. soldiers killed in Iraq?

When I wrote that poem, I was thinking a lot about the war in Iraq; I was living in New Zealand, so I felt doubly removed from what was being done in the name of my country. I watched the war from a distance, and the Bush administration from a distance, and America from a distance. I struggled with how to make the images and events in newspapers and on television real to me, and then I struggled with my own lack of agency. What did I think my individual empathy could accomplish? I didn’t have an answer and still don’t.

“The Numbers Game” is actually kind of a companion piece to the poem that precedes it in Shore Ordered Ocean, “O-Dark-Hundred”, in which I explore the aforementioned frustrations and doubts. I finished venting in that poem, and obviously, the dead remained. We can’t will them back (or will them away). Mission never accomplished. I felt like my usual “materials” (images, syntax, etcetera) were inadequate, so I just let the names speak for themselves.

KS: This summer, coming full circle, so to speak, you'll be teaching at the prestigious Iowa Writers' Workshop. Can you tell us about your philosophy of creative writing teaching? What can your students expect?

I’ll be teaching an eight-week Graduate Summer Poetry Workshop through the Iowa Writers’ Workshop; usually the Workshop’s courses are open to graduate students only, but undergraduates and non-students can also apply for this summer course. I’ll also be teaching a few workshops through the Iowa Summer Writing Festival. I believe in a balance of rigor and nurture in a workshop; a workshop should be a place to take risks and explore new possibilities, to get out of your comfort zone. Of course, to enable participants to take those risks, there has to be a supportive atmosphere and a constructive classroom community. I think that a workshop leader has a responsibility to strive to establish that balance right away, although the participants themselves are ultimately responsible for their own community as well. I try hard to get the ball rolling and then park my ego, allowing my voice to be one of many voices in the room. I think a good workshop requires energy on everyone’s part, but a good workshop also creates energy that propels and informs its participants’ writing even after the workshop itself is over. I’m getting excited already!
Posted by The Writer's Center at 10:20 AM

How lovely to hear about Dora again. I remember when she lived here & I read some of her work locally (DC) some years ago & lost track. Thanks for the links.

Thanks for this interview -- The reading today at the Writers' Centre was excellent. I am very much impressed by Ms. Malech's poetry and her delivery is spot on.