Ilse Munro: The Story Of A Story 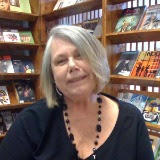 Today's post is by member and writer Ilse Munro. I've known Ilse for a couple years now. When she told me recently that one of her stories was being published at TriQuarterly, I thought it was the perfect opportunity to get her to write for this blog. Here she is discussing the story of that story.

How “Making Soup” went from a single sentence my late mother tossed at me—she rarely felt the need to elaborate—to something that the storied TriQuarterly deemed fit to publish is itself a story. One centering on The Writer’s Center.

Having arrived at fiction writing late and sworn after an unconscionably lengthy pursuit of a doctorate never again to set foot in a conventional classroom, Nani Power’s Advanced Fiction workshop at the Center was exactly what I needed.

Nani was kind in critiquing “Making Soup.” Her primary concern was that the point of view—the narrator was a one-month-old infant—didn’t do my material justice. A fellow workshop participant, Dan Ryan, was far more blunt.

“You can’t do that,” he said. “Not unless you’re Alice Munro.” Then, recalling that that Munro had written a similar story—“My Mother’s Dream,” one I hadn’t yet read—he took time to locate it in The Love of a Good Woman.

I read it, word by word, line by line—Francine Prose would’ve been proud—and then researched what the author and others had to say about it. Turned out it was one of Munro’s favorites as well as one of the ones least liked by the critics.

Not only was that Munro’s story written from an infant’s perspective but it also challenged other conventions. I loved how she abruptly switched from the past to the present tense, instantly increasing the immediacy of a bygone event.

So my task became learning to write as well as the author with whom I shared a surname. Fortunately, Judith McCombs was starting a workshop on Alice Munro at the Center. I showed up with my manuscript in hand and an agenda in mind.

Somehow—it was clearly beyond the scope of the workshop—I induced Judith to read my short story. She pored over several drafts, using her fine poet’s eye to spot each vacuous word, each bland generalization I’d managed to slip in.

When I couldn’t look at the manuscript anymore, I submitted it to a Glimmer Train contest and placed as a finalist. That made me want to get published by the best. I set up a database of journals ranked by their 2010 Pushcart Prize scores.

After 20 electronic tries—going as far as licking stamps seemed excessive given the low probability of success—TriQuarterly accepted “Making Soup” for the Summer/Fall 2011 issue. The same journal once willing to take a chance on the early works of Joyce Carol Oates, Charles Baxter and Amy Hemple.

So it seems you can do that, even if you’re Ilse Munro. And you have people like those I had at The Writer’s Center to support you.


Ilse Munro is a federal government consultant (NASA, DoD) turned writer. She is working on a short story collection and a novel (Cold and Hungry and Far From Home, Anna Noon) and serves as outreach coordinator for the Little Patuxent Review and the Oella Community Garden, which she co-founded. Born in Latvia, she arrived in the United States as a five-year-old war refugee. She now resides in a historic millworker’s house on the Patapsco River.

She has been a member of The Writer’s Center since 2008. In addition to Nani Power and Judith McCombs, she has worked with Barbara Esstman, Kathryn Johnson and Peter Brown. More recently, she has turned to the Center’s Kyle Semmel for help in getting the word out about the Little Patuxent Review. Even the photo accompanying her TriQuarterly piece is connected to the Center: it was taken by Greg McBride, poet and former war photographer, who borrowed her iPhone to snap the pic in the Center’s lobby following his reading.
Posted by The Writer's Center at 12:59 PM

I just read your story. It's very nice--I wanted to hate it because of the point of view but couldn't. I have a question, though. Tri-Quarterly says it has a word limit of 3,500 words. I copied and pasted your story in MS Word, and it told me the story was 5800 words or so. Did TQ once have a higher limit? I have a terrible time writing stories under 5 or 6K words (just the kind of stories I write), so it's hard for me to find possible journals to submit to. Thanks, and great work!