A Million Little Details: the Career of a Book Designer

A Million Little Details: the Career of a Book Designer
by Maureen Punte

If you’ve read a book and didn’t stumble over the text, or notice things like ragged paragraphs, widows, or rivers, you can thank the careful skill of the books’ designer for bringing it all together. As a book designer with over 35 titles to his credit, Jay Naughton has worn many hats: copy editor, photo manipulator, illustrator, production coordinator, marketing person, accountant, and business manager.

Book design is something Naughton fell into. A self-proclaimed “software junkie,” he taught himself the latest programs—including a fad at the time, desktop publishing. Like others, Naughton was amazed that a person could produce print material at home. After learning the software, he started taking on side jobs designing things like menus and newsletters.

He later worked as a writer for the National Lampoon website. When the company got a book deal, Naughton was asked if he could produce the book. Having worked at a nonprofit producing books, he felt he could try. Although he wasn’t actively marketing himself, this led to more work from the publisher and others.

As for his design skills, Naughton says he just picked them up, “I’m not trained at all. Again, it’s just having an eye for what looks good and what doesn’t.” It’s a modest answer from someone who knows what makes for a strong book design, “If the typography and design draws too much attention to itself, you’re taking away from the fact that it’s a book someone should be reading, not a museum piece someone should be admiring.”

At his height, Naughton was producing a new book every three weeks. This requires a detailed plan. After receiving information on the size of the book, the page count, and the word count, he would lay out four or five sample chapters for the client. For some projects, he was given a few days to sit and think about the layout. For others, he sat with the authors working out ideas on the spot.

For Naughton, book design is a constant dialogue. The designer has to be open to what the author wants because ultimately it’s the author’s book. It’s also about being prepared for revisions because “final text” doesn’t necessarily mean “final.” Naughton explains the trouble one small change can cause. “If [the author] changes one word there, boom, half of this paragraph’s on the next page. None of your pictures line up, your captions are gone.”

In addition to his work on the National Lampoon books, Naughton worked on a series that included a biography of John Belushi. Belushi’s widow, Judith, a co-author on the book, had one layout request: make it look like Rolling Stone. Belushi had appeared in the magazine many times. This required some research on Naughton’s part. Knowing how the magazine was laid out, and more importantly what typeface they used, was crucial. He went through thousands of fonts on his computer. For each one Judith said it wasn’t right. He wound up buying the font.

The book included pictures from Belushi’s life. Judith sent Naughton a trunk of scrapbooks, Polaroids, and notes. However, there were pictures Judith and co-author Tanner Colby wanted in the book that weren’t in the trunk. It was up to Naughton to track these down. This meant calling John’s old friends and Universal Studios for movie stills. Each item had to be cataloged, scanned, and cleaned up in Photoshop. As Naughton points out, “It’s a million little details,” so staying organized, both digitally and physically, is essential. All of this became Naughton’s job because, as he says, “If someone uses a snippet of something you have to know, it shouldn’t fall on the designer’s shoulders, but if I’m the only one who can do it I kind of have to.”

When the recession hit, Naughton’s clients started going out of business and the book design projects went away. This hasn’t concerned Naughton in the least. As a designer and freelancer, he says you have to know what’s happening. Much like the Internet boom and rise of purchasing music online, Naughton sees the time of the e-reader as exciting, “I think you’re going to see more interactivity in books, stuff you can’t do on paper, to justify the cost of buying it on Kindle or iPad or Nook—little animations, photos, links, or sounds. Who knows? I’m diving into that now to see what happens.” As for the books that he designed, Naughton has been asked to send the materials so e-versions can be produced. ¶
This article was originally published in the summer 2012 Workshop & Event Guide. 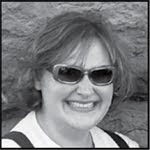 Maureen A. Punte is a web specialist at The Johns Hopkins University. She holds a B.S. in Visual Communications Design from Stevenson University and an M.A. in Publications Design from University of Baltimore. Having worked at The Writer’s Center as the art director, and as a freelance designer for seven years, she is now one of the managing principals and weekly blogger at the consulting group, Radar Collective.

photo by: Charles Jensen (Punte)
Posted by Maureen at 10:00 AM